Iniobong Ekong is a retired captain in the Nigerian army and a security aide to Governor Udom Emmanuel of Akwa Ibom State. In this interview with PREMIUM TIMES’ Cletus Ukpong, he revealed how he was arrested by the Nigerian army on the eve of Nigeria’s presidential election.

PT: What happened? Everyone suddenly woke up to the news about your disappearance?

EKONG: On Thursday, 22 February, I was in a meeting here at my house in the village in Nsit Ubium. At about 11a.m, I got a call from the brigade commander in Akwa Ibom that he needed to see me to discuss some election strategies. Since they are relatively new in the state, I felt they needed to tap from my experience, probably some nipping points, probably some volatile areas in the state. So, I quickly took my bath and then drove to the brigade in Uyo.

At the army barrack in Port Harcourt, I filled the form to see the GOC. I was asked to drop my phones, which is customary. They ushered me into the visitor’s waiting room. When I enquired of the GOC, they told me he took a short trip to Asaba, Delta State, that he was on his way back. So, I waited. When it was about 5:30 p.m. I realised he had not come in, so I told the military officers I had elections to participate in the next day and therefore I needed to start heading back home. They told me no, I should wait that he (the GOC) was almost around and would soon be here. So, I waited. At about 6:30 p.m., six armed soldiers came into the waiting room. They told me they were asked to come and protect me there. Initially, I was thinking, ‘Oh, do I need to be protected in the barrack?’ Then I suddenly realised something was funny. From that time on, I knew something was funny, but I had nothing on my mind. It was funny because this was an environment I was very familiar with and I have been working with them (the military). But I just put my mind off it and then slept off.

At about 1 a.m, one Captain Kasama woke me up and said we have to go to Uyo. And I asked him ‘To do what in Uyo?’ He said he had instruction to take me to Uyo, and I asked him ‘By 1 a.m, on East-West Road?’ I told him I wasn’t going to follow him. I should have been the one to want to go to Uyo because of the elections, but knowing how dangerous the road was, especially in the night, I told him I would not follow him. They tried everything to get me to go with them, but when they realised I was determined not to follow them they told me to go back and sleep. And of course, you know they cannot touch me.

PT: Where did you sleep?

EKONG: In that same waiting room.

PT: You didn’t have a bed to sleep on?

EKONG: Nothing. I sat on a chair for 13 days till Thursday when I came back. From Friday to Monday, I had no food or water.

EKONG: Nothing! I became adamant and insisted I won’t talk to any of them until I speak with my wife. Then they offered me a phone from their office because they had shut down my phones.

PT: Did you meet with the GOC?

EKONG: He did not meet with me from the day I entered there until Thursday night when I insisted on seeing him.

PT: So, you spoke with your wife on phone?

EKONG: I spoke with my wife.

PT: What did you tell your wife?

EKONG: Well, I just told her what happened and that I really didn’t understand what was going on. But that my suspicion was that they didn’t want me to be part of the elections in Akwa Ibom.

PT: That was your suspicion?

EKONG: Yes, that was just my suspicion. But I later confirmed it. You know, in my traveling to Port Harcourt, I had asked my councilor to drive me. So, after about eight days I now insisted they should let him (my councilor) go home, that he was an independent man. If they wanted me, the man had nothing to do with why they wanted me. They saw him as a driver, so they agreed he should go. But unfortunately, that same day there were some online publications that said I was taken along with my councilor. So, at the point of collecting his slippers and phone, they now asked him ‘Are you a driver or a councilor?’ He said he is a councilor, and they said ‘No, you can’t go. You’ll have the same influence (in the election) like him if you go.’ So, they kept him too.

PT: Did your wife become calm having told her where you were?

EKONG: Yes, she was. But unfortunately, she became very ill and needed to be flown out of the country urgently on Wednesday for medical attention. That was when I couldn’t bear it any longer; I said a man must be able to stand up for his wife, especially at such a time. So, on that Thursday I noticed that the GOC had come in and they had devised a new route for him to be entering his office. I made so much trouble that I must see him, and luckily the commander of the military police informed him that he needed to talk with me.

PT: You have known him before?

EKONG: He is my mate of 35 years. We passed through the same course in the military, and we are friends.

PT: When the two of you met, what did he tell you?

EKONG: When I met him, I asked him ‘Why keep me here, what’s the problem?’ He said to me that the allegation against me was that I was using soldiers to harass people. I asked him, ‘Are you the one that gave me the soldiers? Who gave me the soldiers? And where are the soldiers they said I was using to harass people?’ He now said, ‘Are you saying it is not true?’ And I am like ‘Couldn’t you have done some findings before inviting me here? Don’t you know me, and that can’t have anything to do with such?’ I told him I couldn’t stay there again, that I needed to go home and take care of my wife.

PT: Did he remember you have been his friend?

EKONG: Remember? What do you mean by remember? I say that is my friend. Don’t forget that I am an S.A on security to the governor and that as part of my duty I must have assisted the GOC to pay courtesy call on the governor, and I that I must ensure a conducive relationship between him (the GOC) and the governor.

PT: Has the military apologised to you?

EKONG: He (the GOC) did not apologise. But he offered tea in his office, which I rejected.

EKONG: Yes, I am terribly ashamed. Up till now, I still don’t understand why the military should be involved in this kind of thing. 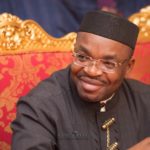