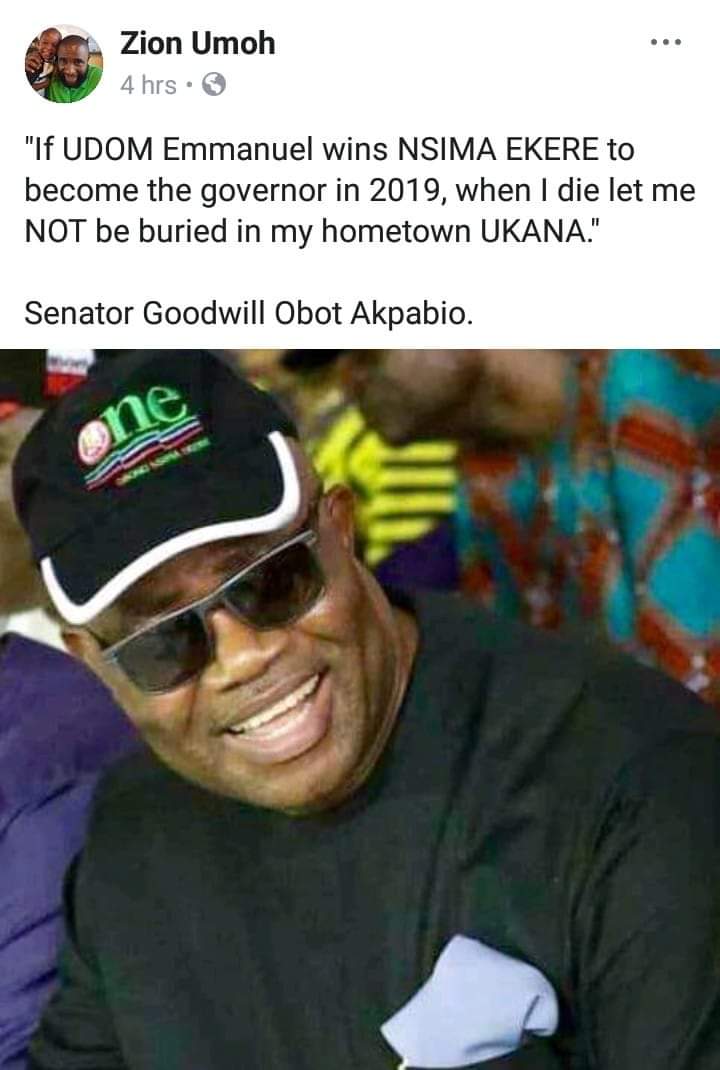 My people, when I earlier disclosed that the defection of Godswill Akpabio to the All Progressives Congress, APC, was a grand conspiracy to once again deal with the people of Uyo Senatorial District (Ibibios), nobody understood me. Today, it’s gradually unfolding.

In 2014, during the twilight of the 5th Assembly, the then Governor of the State, Chief Akpabio, directed the Speaker of the Akwa Ibom State House of Assembly, Mr. Sam Ikon to declare five lawmakers’ seats vacant following their defection to the All Progressives Congress.

Three out of the five lawmakers were from Uyo Senatorial District(Ibibio nation) while the other two were from Oro nation. Akpabio ensured that he dealt with the Ibibios and Oro nation.

After the declaration, none of the sacked lawmakers took laws into his/her hands, or started a fight with the Speaker.

Few days ago, following a valid court judgment, Speaker Luke declared five seats of lawmakers who defected to the APC vacant. After the sitting, three of the affected lawmakers, disgracefully broke into the chambers, and elected Akpabio’s stooge, Nse Ntuen, as their new Speaker. Is this not another attempt by Akpabio to deal with Uyo Senatorial District (Ibibios) who have vehemently rejected his political overtures to unseat Governor Udom Emmanuel?

Being a declarative judgement, the Honourable Speaker had no choice than to comply with a valid court judgment.

His decision to declare vacant the seats of Itu, Etim Ekpo/Ika, Ikono, Mkpat Enin, and Essien Udim state constituencies is also in line with section 109 sub 1g of the 1999 constitution as amended.

Therefore, the show of shame by Akpabio through his house boy Nse Ntuen and the shameless and disgraceful display of power drunkenness by the APC in Akwa Ibom State led by the once responsible and respected Mr Ini Okopido should worry even APC members who still have good conscience except all of them have been infected by the Akpabio virus of blood, violence, anarchy and destruction which the same party condemned before the importation of Akpabio into the party.

This is a conspiracy that a factional Speaker be made from Ikot Ekpene Senatorial District, with the party chairman and Deputy Governor from the same axis.

My people, this is not a fight that should be left in the hand of Governor Udom Emmanuel and Barr. Onofiok Luke. We must rise in unison to salvage the soul of Akwa Ibom State.

The conspiracy of Akpabio to forcefully plant his stooge, Nse Ntuen as the Speaker of the State House of Assembly in order to topple Governor Udom’s administration, and send a signal for Federal invasion should not be allowed.

This is a clear case of shortchanging Uyo Senatorial District(Ibibio) by Annang cabal, with the support of the State APC Chairman who is also an Annang man.

Let us know that, Akpabio has always conspired with some of his selfish Annang brothers to fight the Ibibios. Let us not forget in a hurry the story of the former Managing Director of NDDC, Ambassador Sam Edem, in which Akpabio as Governor, conspired with the then Delta State Police Commissioner, Udom Ekpoudom to fight Ambassador Edem on trump up charges.

Today, we are in again with the cable rising to make the people of Uyo Senatorial District (Ibibios), insignificant majority.

Our children will ask us questions, if we don’t fight for their liberation.

I endorse this message.

The Unstoppable Voice of Truth.