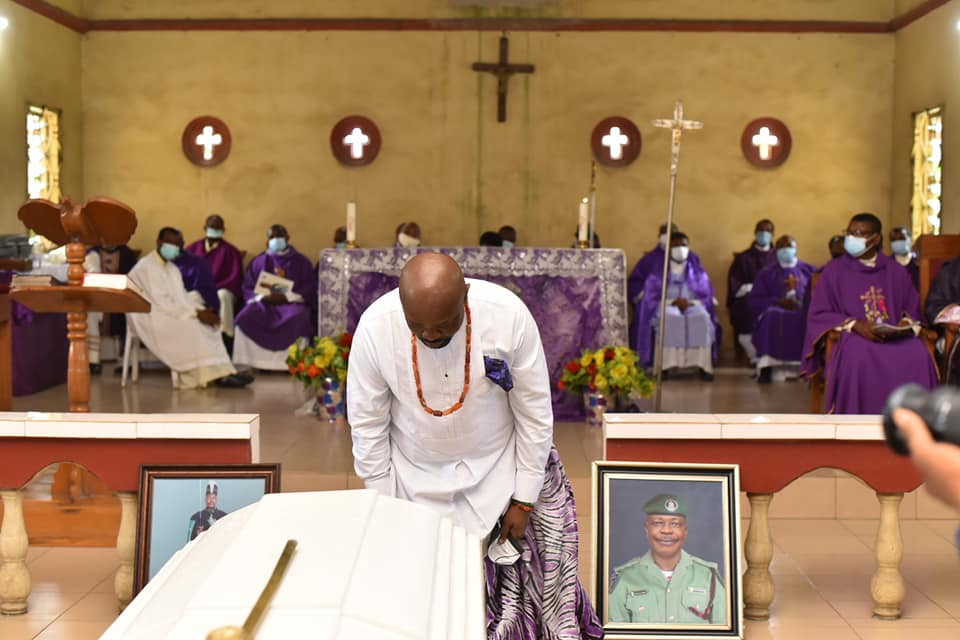 Those of us from this community, those of us in this family know that the fear of Sir Francis was the beginning of wisdom. He took the time to discipline us. He never spared the rod to spoil the child”.

These were the words of the Honourable Commissioner for Trade and Investment, Prince Ukpong Akpabio, as he recounted the life and times of his Uncle, Late Knight Francis Jacob Umoh. Speaking on behalf of the bereaved family, Akpabio told sympathizers at Holy Trinity Catholic Church, Utu Edem Usung, Ikot Ekpene Local Government Area that apart from producing a lawyer in him, his Late Uncle trained his children to stand out in different fields of life.”His son came out here and after addressing us, said he is appearing for the family. My Uncle gave me a lawyer to walk within my career journey.

My Uncle also gave us a Priest, who also addressed us here and I felt proud of my late Uncle’s achievement in life”Remembering the days of his late Uncle as an Elder in the Church and family, Akpabio said he also enjoyed genuine love and care from his Uncle.”My Uncle once paid me a surprise visit to my house in Uyo. It was my Wife that came to call me. A surprised me asked her if anything was wrong and she said no, that they were all dressed in Catholic Church attire. I went to see them and my Uncle led elders of this Church he came with to pray for me.

The blessings, prayers I received from this church that day, and the many prayers he offered to God on my behalf have kept me till today. Those prayers will carry me throughout my lifetime” Akpabio mourned. The Commissioner promised that the legacies of his late Uncle will be sustained in the family, the community, and the Catholic Church, where he served God till death as a Knight of Saint Mulumba (KSM).

He appreciated God for the long life given his late Uncle to surpass the Biblical age of seventy and live up to seventy-three years. Late Knight Francis Jacob Umoh, brother to Commissioner Akpabio’s father, Late Senator Justice Nsima Akpabio, is survived by a Wife and seven children, including Rev. Fr. Camillus Francis Umoh, CM, and Barrister Albert Francis Umoh. Gloriously, like the saying goes that children are to bury their father and not vice versa, Rev. Fr. Camillus Francis Umoh, CM, performed internment as a final farewell for their Father.