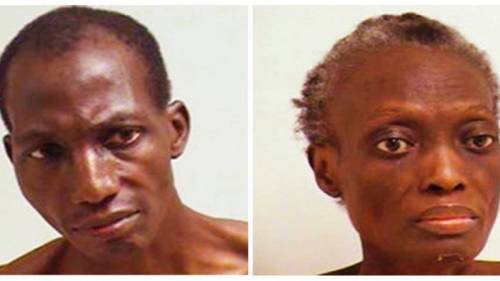 In a letter signed by their surviving 11-year-old son, and addressed to ‘Lawyers of Sauk County Circuit Court’, he wrote: “The hunger is too much. Please help me now so I may eat,” “I can’t continue in such a life with no food” and “If I don’t get food now I’ll probably die of hunger.”

Kehinde Omosebi, aged 49, and Titilayo Omosebi, aged 47 and residents of the United States, both face up to 37 years in prison on a combined sentence, as they have been charged with starving their 15-year-old son to death.

Another son, aged 11, was found alive but he was extremely emaciated.

According to the Madison State Journal, Kehinde, the boys’ father, who claimed he is a pastor with Cornerstone Reformation Ministries, had ordered a religious fast that lasted as long as 40 days.

All the boys had as nourishment during the fast, which began on July 17, was water.

The deceased died on Friday in Reedsburg, while the couple was charged on Tuesday in Sauk County, Wisconsin, USA.

According to Reedsburg Police Chief Timothy Becker, policemen had to break through padlocked doors to reach the boys at a residence on Alexander Avenue on the west side of the city, on Sunday, after the father reported the death to the Police, two days it occurred.

“It wasn’t a fast; it was neglect because the statutes make it clear that you have to provide necessary food (to children). When you lock your kids in the house and the father is the only one who can leave, it stops being a fast and starts being starvation and neglect,” Becker said.

“It wasn’t like the kid was healthy on Thursday and then died on Friday. His death was a long process and his parents did nothing to stop it. That’s the most concerning thing about this.”

According to the Journal, the 11-year-old boy had to be assisted to walk out of the residence. He held onto a Bible and an envelope, which, according to the Police, contained pamphlets about death, which were distributed to the officers when they arrived at the residence.

In a letter signed by the 11-year-old, and addressed to ‘Lawyers of Sauk County Circuit Court’, he wrote: “The hunger is too much. Please help me now so I may eat. I can’t continue in such a life with no food and If I don’t get food now I’ll probably die of hunger.”

He has been taken to the American Family Children’s Hospital in Madison, and placed in protective custody.

Speaking on the state of the Omosebi’s residence, Becker said: “The residence had no phone, no power, no food. I’ve never seen anything like it before. It’s tragic.”

He, however, noted that Omosebi was “not affiliated with any church that has any public records proving their existence”.

Sauk County Circuit Judge Wendy J.N. Klicko set bail at $5,000 for Kehinde Omosebi, and ordered him to have no contact with his surviving son. An initial court hearing for Titilayo was delayed.

However, both parents are said to be eating again, according to Becker.

Kehinde told Police that it wasn’t the first time the family would be involved in a religious fast, noting, however, that this was the longest and they were awaiting “blessing from God”.

He told the Police that the fast was supposed to end on Friday, the day his son died.