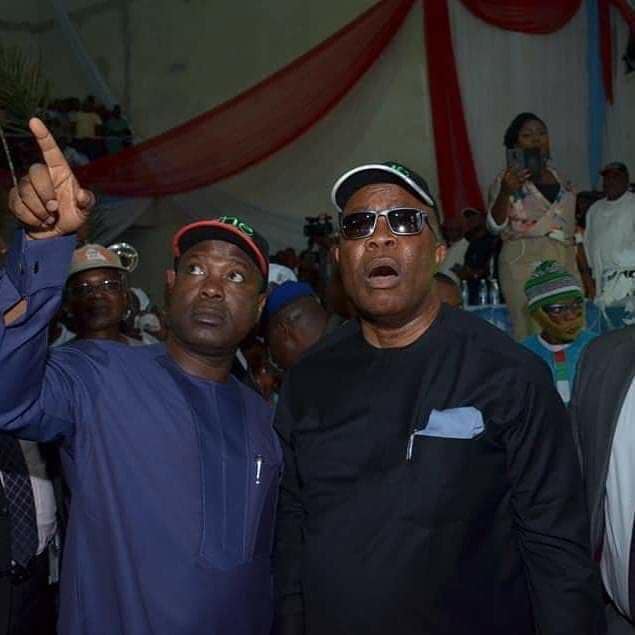 You must remember that as a result of the claims by the APC governorship candidate, Mr. Nsima Ekere, two outstanding things happened at the ongoing Governorship elections petitions tribunal.
1st, his principal witness and local government collation agent, Akanimo Edet went to the dock and claimed that Etim Ekpo witnessed no accreditation and election.

Secondly, the next day, his brother and Etim Ekpo/House of Assembly Candidate, Chris Okorie, went to the same dock and said there was an election and that APC won in Etim Ekpo. When asked if he knew Akanimo Edet his former House of Assembly member, he vehemently denied knowing Edet who acted as his party’s agent, yet admitted he depended on that same agent for the election he was contesting. “I don’t know who my party decided to use as its agent in that election”, yet you were a candidate.

Three days after, when he later mounted the witness box, and with recourse to the conflicting testimonies of his respective agents, Nsima Ekere asked the tribunal to put away all his earlier claims and cancel the entire election he had claimed to have won.

The tribunal panel led by Justice A.M Yakubu, is now faced with the same scenario presented to King Solomon, several years ago in the ancient kingdom of Isreal. In that story, Solomon had two single mothers who confronted him with claims of ownership to a living baby, at the expense of the other baby, the dead one. His suggestion was that the living baby be divided into two and each half was given to the two women. This did not augur well for one of the women, who pleaded that rather than killing it, the king could as well give it to her contender. On the other hand, the other woman was not even interested with the baby, “kill it and divide into two.” Which genuine mother would bear the thought of having her precious child butchered in her presence?

So Nsima genuinely won in an election, and mounts the witness box to ask the judges to cancel the entire election for a fresh one?

While even saying this, the tribunal brought to his notice that a police DPO had even come from ONE local government area, with a result which showed that the petitioner won in Essien Udim. Surely this particular result should not be canceled, they suggested to him. “I am the ONE here, myself, and l am saying that I don’t care whether I won, all I just want, is for the entire results to be canceled.

The precedent has been set by the wisest king the world ever had. No man can destroy what he treasures and had genuinely acquired.

As you begin the week, please note that no foundation stands when built on falsehood. No matter how hard one tries, the truth will always prevail at the slightest test.

Thank you APC eyewitnesses, happy new week to everyone.