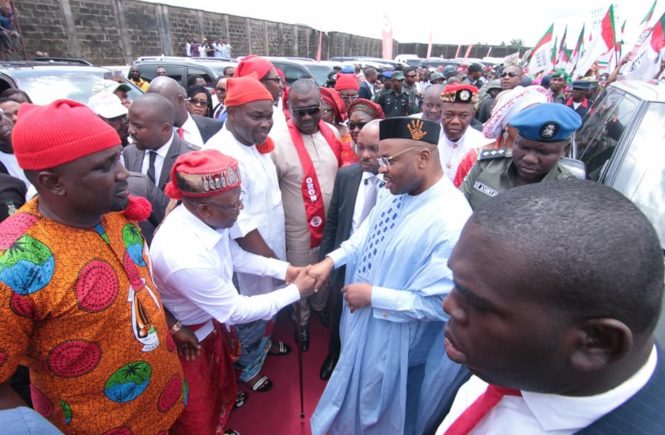 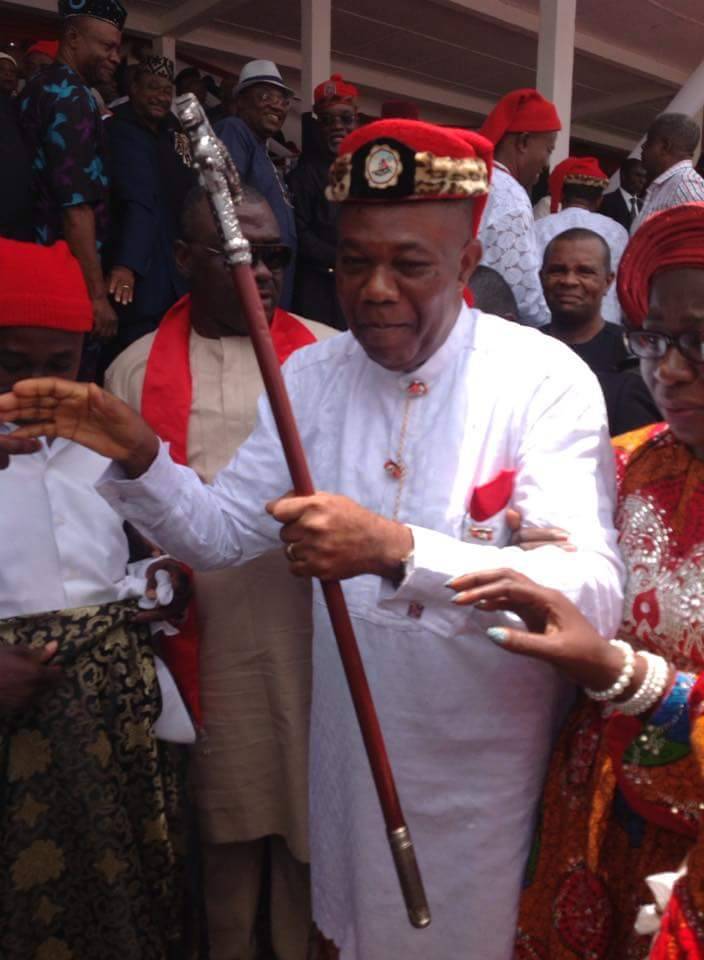 It was a colourful, glamorous and emotional ceremony, as an event organised to receive two eminent indigenes of Oron federal constituency of Akwa Ibom State, turned out to be a celebration of the impactful leadership of Governor Udom Emmmanuel the federal constituency.

At a reception organised in honour of the newly appointed Secretary to the State Government, Dr. Emmanuel Ekuwem and President General of Oro Union, Chief (Mrs.) Janet Amba, the Oro people turned out in their numbers, the youth, women, elders and royal fathers to commend Governor Emmanuel for his numerous efforts at bringing back hope to the people.

In a dramatic show of love and appreciation, the youths rallied in solidarity with Governor Udom Emmanuel for particularly fulfilling his promises on road constructions, building of classrooms, provision of social amenities, industrialization and earnestly working to ensure Ibom Deep Seaport is realized.
Their general opinion was encapsulated in the few lines by the chairman on the occasion and former deputy governor, Engr. Etim Okpoyo, who said his people sincerely appreciated the governor for redefining their narratives in development programmes and political inclusion and pledged their resolve to continue to support him, even as he urged the governor not to relent in executing more projects in the five local government areas of Oro nation.
During his campaign visit to the area in 2015, Governor Emmanuel had assured the people of Oron that he is the Oron Governor they were looking for, and that their pains were his pains. Barely two weeks in office, Governor Udom Emmanuel worried by the reports from the federal constituency which accommodates the five local government areas of the third largest ethnic group in the state, visited Oron metropolis under a torrential downpour. Governor Emmanuel literarily wept as he walked under the downpour, and in the flood water. From the Main Oron Road to Bassey Street and through Mainland Avenue, a road that leads to the Maritime Academy of Nigeria, things were not just right in the eyes of a governor whose name means right.

It was not an interesting site to behold, as the governor found no access to the communities in the ancient coastal area. When Governor Emmanuel promised the Oro people that he will return, they perhaps did not believe him. In no time, Governor Udom Emmanuel completed the construction of outfalls drains to takeaway flood water from Oron metropolis and channeled it to the river basin. Apart from the underground drains, he also completed the construction of five roads which include, Mainland street, Efiat street adjoining Efiat lane, Bassey lane, Anwana Esin street, Mary Hanny, and the Post Office street. In 2016, exactly one year into his administration, Governor Emmanuel returned to Oron, this time, it was to the warm embrace of the people who were amazed at the wonders he had bequeathed in just one year.
Indeed the story is different today as the people of Oron are pouring encomiums on the Akwa Ibom State Governor. Residents described the road projects as amazing, saying the state Governor has wiped away tears and decades of suffering.
Apart from these two major dual carriage way, Akwa Ibom State Government has awarded the construction of five new roads. This includes Atta Street, Ebo Street, Market Street, Murtala Mohammed Road and Asbestonit Road. Market Street drainages are being linked to both Awana Esin Road and Post office Street, complete with water channelization to serve as outfalls drainage that will collect the flood water and channel it to the river basin.

In Mbo Local Government Area , Governor Udom Emmanuel-led administration has demonstrated a clear sense of commitment not to abandon any project started by the previous administration mobilized the contractor back to site to complete the abandoned, once very popular, Etebi- Ewang road with a Bridge, that links Esit Eket and Mbo Local Government Areas .
Governor Udom Emmanuel has awarded contract for the construction of the 9 kilometer Secretariat Road that traverses Eyo Ulliong- Ediko- Uduetta in Udung Uko Local Government area with spurs of about 3 kilometres, the first of its kind since creation of the local Government Area. Apart from the awarded road, the State government is also profiling Udesi road that cut across Mbo-Udung Uko –Orue Ofong Oruku Local Government Areas respectively.
In Okobo and Urueffong Oruko, the State Government has awarded contract for the construction of Nung Atai Eta-Ebighi Eta-Obufi-Atabong Road with a jetty and Uruting- Eyede-Osu Offi-Afaha Osu-Otieke-Utine-Nsie Road as well as the Ebughu –Udesi-Oruko road.

The Ibom Deep Seaport is an audacious attempt to change the maritime story of Akwa Ibom State. It holds the promise of an industrial revolution of our State. It holds the promise of the industrialization of Akwa Ibom. Recently, to further open up the deep seaport communities, a 55.5km dual carriage super Highway was recently flagged of to connect Ibeno-Eket and Oron.
These among other reasons could account for the overwhelming expression of satisfaction and happiness on the Governor, by the Oro people during the special reception ceremony.

Speaking at the ceremony by the Oro Union in Oron, Governor Udom Emmanuel commended Oro youths for being very peaceful and promised to provide more employment, development, and empowerment in order to make them to become responsible men in the society.
Amidst cheers and ovations, the Governor who was accompanied by his wife, Mrs Martha Udom Emmanuel, recalled some of the intervention works successfully undertaken by his administration in Oro nation shortly on assumption of office in 2015 and promised to visit the area soon for inauguration of projects.

Commending the honorees, Dr Emmanuel Ekuwem and Chief (Mrs) Janet Amba, the State Chief Executive said he is not yet done with his plans for the people, and spoke of more good things to come in power supply, more roads and flood control programmes.
The new Secretary to the State Government, Dr. Ekuwem who thanked his kinsmen for the honour on them, said their appreciation was more for the governor who is assiduously committed to transforming the area, and indeed the entire state.
This appears to be the best of times for the people of Oron Federal constituency of Akwa Ibom State, otherwise known as Oro nation.

Through quality roads network, erosion control interventions, drainages and other health and educational infrastructure, iced with unprecedented political recognition, Governor Emmanuel is telling the people that they are so dear to his heart.
All the dignitaries including the Deputy Governor, Mr. Moses Ekpo, Speaker of AKHA, Rt. Hon. Onofiok Luke, serving and former political office holders and indeed the royal fathers, watched with awe as appreciations trailed the governor’s latest visit to the Oro people.

With the ongoing construction of the Airport -Okobo-Oron dual carriage road, and other interventions, anyone can see clearly that Oro is gradually becoming the major gateway of Governor Emmanuel’s industrial revolution in Akwa Ibom State. For the Oro people, it is worth noting that at last, prophets are being recognized by their kinsmen, while the tangible efforts of the governor in their respective communities have won him their admiration.