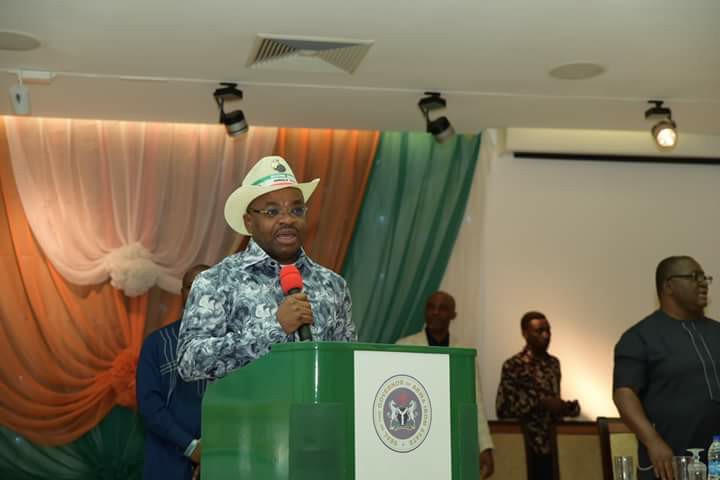 Earlier this evening, an enlarged stakeholders meeting of the PDP Akwa Ibom was held at the banquet hall of government house, Uyo. Those present were H.E the Governor, state chairman and entire State Executive Committee, National legal adviser, members of the National Assembly, state legislators, chapter chairmen, National delegates, members of the board of trustees,NEC and National caucus, chairmen of local government councils and other stakeholders.

State chairman ,Obong Paul Ekpo while welcoming the attendees informed of the party’s preparedness for the elections and presented the report(text and video) of the federal constituency tour to the Governor. He further informed that the guidelines for the party nomination are available and will soon be released.

Senator Emmanuel ibokessien who spoke for ikot Ekpene senatorial District assured the Governor of the support of those from the senatorial district and commended him for the excellent manner he is governing the state. Senator Helen Esuene and Rt. Hon. Nduese Essien who spoke for eket senatorial district thanked other senatorial districts for the cooperation given to their son, urging them to continue to support the Governor. Otuekong Idongesit nkanga and senator Effiong Bob informed that the shortest route for their senatorial District to return to power was returning Governor Udom Emmanuel for a second term. They expressed the preparedness of their constituents to continue to support the Governor. Speaking on behalf of the state House of Assembly,Hon. Felicia Bassey assured the Governor of their customary support in the discharge of his duties as Governor and leader of the party.

Senator Bassey Albert spoke on behalf of the members of the National Assembly, expressing their delight about the Governor’s role in the rebirth of the party. They assured the Governor of their support in the forthcoming elections. Barr. Emmanuel Enoidem intimated that the national party was very pleased with the helpful disposition of the Governor towards the party and other pressing national issues.

The Governor in his address appreciated the stakeholders for their steadfastness and loyalty to the party and his administration. He informed of the rebirth that the party was under going which has placed it on the right track to reclaim power. He urged those contesting to prepare for free, fair and credible elections. He thanked the party for undertaking a tour of the Federal constituencies, promising to study the report and implement the recommendations.

Party stalwarts generally expressed gratitude to the party for constantly convening meetings which keep them abreast of happenings within and outside the party.