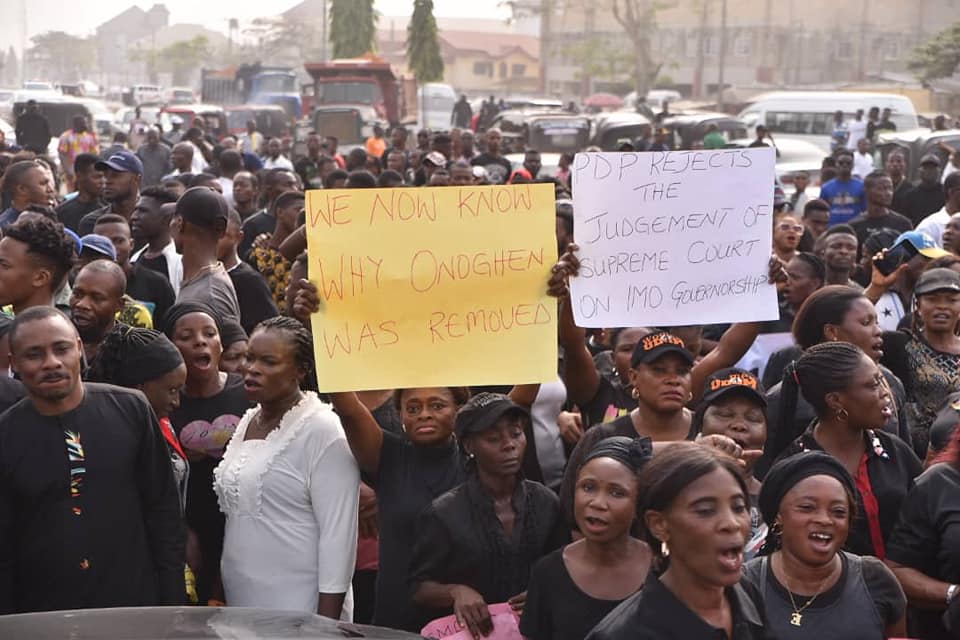 “The Court shall review any judgment once given and delivered by it save to correct any clerical mistake or some error arising from any accidental slip or omission, or to vary the judgment or order so as to give effect to its meaning or intention. A judgment or order shall be varied when it correctly represents what the Court decided nor shall the operative and substantive part of it be varied and a different form substituted.”

The quotation above is the provision of Order 8, Rule 16 of the Supreme Court Rules. So when the judicially ousted Governor of Imo State Emeka Ihedioha lamentably announced his rejection of the judgement and inability to do anything about it he probably did so for either of two reasons. Unawareness of the provision above or total lost of faith in the judiciary. Either way His Excellency emeritus is wrong. He ought to have had a thorough review of the legal options regarding the said judgement with his legal team and pundits as well. That would have reflected in his release; that he is aware of this option but considers it an exercise in futility already. As a leader he of all person should never shy away from giving a legitimate fight regardless of how otiose- it may seem because that is what those he seeks to lead do on daily basis. Nigerians fight everyday for things that are already theirs or ought to be; light, road, shelter, security, welfare, wages. Just name it. Our leaders must lead us in this fights. Of course some school of thought are of the submission that this calls for review not overruling.

Now back to the judgement. The supreme Court is in the solomonic words of Chukwudifo Oputa JSC not final because it is infallible but infallible because it is final. The import and purport of this is that it is presided by humans like us and not gods. Hence the above provision makes room for the supreme court to not over rule itself on the same case but to correct itself in the same judgement where such is reached per incuriam i.e in error. And this error by that provision has to be predicated on accidental slip or omission. The only challenge is whether the judgement truly represents the decision of the court. In resolving this the supreme court will have to reconcile the discrepancy in total numbers of votes cast and total number of accredited voters. 950,952 votes were according to the supreme court cast out of 823,743 accredited voters. This arithmetic thaumaturgy is what the supreme court must as a matter of order 8:16 demystify. Anything short of this perpetually puts the Apex court in ridicule. We’re yet to recover from the conundrum caused by the theory of mathematical exactitude of Awolowo vs Shagari more than three decades now.

Another particular of error is in the fact that the same supreme court had declared Mr. Uche Nwosu as the authentic candidate of the All Progressives Congress (APC) in the said election and by so doing rendered the party “candidate-less” in the said election since it did not go further to announce anyone as candidate in the same judgement. In fact, Hope Uzodima by the previous judgement of the court should not even have been recognized by the court. So one would expect the legal team of Ihedioha to approach the court for a review of its judgement either to bail itself or drown itself further in the obloquy.

Justice in law need not just be done but ought to be seen to have been done. The said judgement is deficit of this quality. No reasonable man seems to understand the logic of the supreme court here. Whatever justice they seem to have done is not seen. They ought as an obligation help us see it. Else, law teachers will become even more confused on what to teach law students regarding the principle of doing justice and seeing justice to have been done. Litigants and lawyers are even the worse of it. And the judges themselves are in trouble with such precedence. So why the protest? Simple. Injury to one anywhere is injury to all everywhere. We have in recent Nigeria been treated with all sorts of distasteful judicial concoctions since the emergence of the present chief justice of the Federation. Justice these days seem to manifestly lack the appearance of “according to law and good conscience” ratio. And every time this happens Nigerians shudder and move on. This is inimical to our nationhood. It is analogous to a situation where some tout comes to your neighborhood occasionally to extort the people. Every time he does so and gets away with it it emboldens him to do so even more. Where he continues unchallenged eventually he will set up a structure in the neighborhood for extortion and it would in no time become a norm.

Except Nigerians act for the world to see the world will think we’re comfortable with our shackles. The magicians in the judiciary will think we’re enjoying their show. If the People’s Democratic Party (PDP) had called for protest against any action of the government before now they would have accused the party of partisan blackmail but elections are over and there’s nothing to accuse anyone of now except the obvious. Truth is if the Supreme Court had averted their wise minds to the numerical discrepancy and ridicule they would have understood why the so called votes from 388 units were disqualified. Now they will have to edit the number of votes or cancelled some votes from the “dubious” 388 units themselves or restore sensibility to the judgement and dignity to the judiciary.

Fellow Nigerians, whether you have interest or not, know ye now that the Chinese proverbial curse “may you live in interesting times” has long come upon us. This curse doesn’t require fast and prayers for deliverance but action. Today it is Imo state, tomorrow it could be you and I. Remember how it all started, invasion of Akwa Ibom Government House, invasion of Justices homes, besieging of the National Assembly, Unlawful removal of the Chief Justice of the Federation, the records are many, now it is the Supreme Court going against itself. Only God knows what next will follow and who next. But for today God forbid that we sit down, fold our arms and do nothing.
Happy Buhari to Y’all!!!