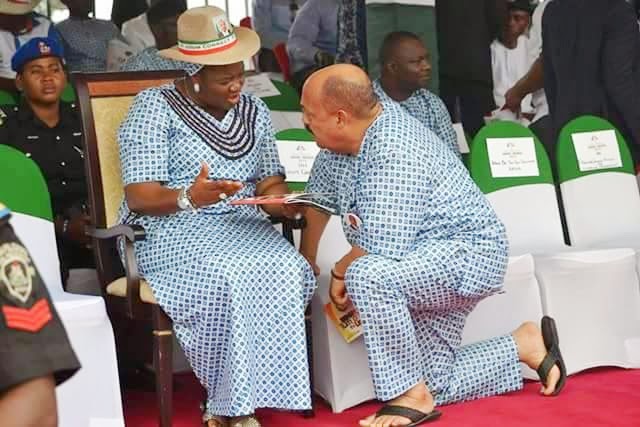 Controversy, on Tuesday, trailed a social media message allegedly sent by former Akwa Ibom First Lady, Mrs Unoma Akpabio, wherein she asked members of a Watsapp group christened SALVAGE AKWA IBOM to tell the Speaker of the Akwa Ibom State House of Assembly, Mr Onofiok Luke, to shut up on the recent police invitation of some members of the Governor Udom Emmanuel’s administration to Abuja for questioning.

Speaker Luke had, shortly after plenary, told assembly correspondents in clear terms about the invitation which bothered on allegations of the destruction of campaign billboards, and affirmed that Akwa Ibom people would not be moved by any form of intimidation coming from the Presidency ahead of the 2019 general elections.

But an apparently outraged Unoma Akpabio, as one whose husband and former governor, Senator Godswill Akpabio, is a leader of the All Progressives Congress (APC) in the state, would not have the Speaker make any news about the invitation, said to have been ordered by the Inspector General of Police, Mr Ibrahim Idris.

She had written with the name saved as HE (Her Excellency) Unoma Akpabio on the Watsapp group: “Tell this boy (the Speaker) to shut his mouth. Tell him Udom is not worth this trouble he is finding. Some people here  please, deliver this message to him”.

When the former first lady’s message was first brought to Facebook by one of her domestic aides, Michael Ekpo a.k.a Michael Matthew, the Press Secretary to the Speaker, Mr Kufre Okon, dismissed it, asking audience members to disregard the post from “the old mischief maker called Michael Matthew” as, according to him, there was “no evidence Mrs Unoma Akpabio could have said anything derogatory since it was clear the Speaker didn’t insult Mr President”.

But Michael Matthew, who also doubles as a social media assistant to the former first lady, however retorted that he had already posted a snapshot of Mrs Akpabio’s message on the Watsapp group of which he is a member, asking Mr Okon to further pass the message to his boss, the Speaker, and should also “stop being silly”.

Mrs Akpabio’s fresh insult to Speaker Onofiok Luke may have resurrected her notorious penchant for humiliating top public office holders in Akwa Ibom state. It would be recalled that kneeling, prostrating or scenes of political office holders paying extreme obeisance to the former governor’s wife, even in public places, was a common feature in the state during the time of her husband’s reign as governor. .

The PUNCH had, sometime ago, reported an incident where a former Commissioner for Works, Mr. Don Etim, then Dean of the College of Commissioners, was found kneeling down to talk to Mrs Akpabio during a PDP campaign rally.

According to the paper, many of the commissioners who served in the Akpabio government could not stand before Mrs. Akpabio to talk; they must either face a different direction or stoop low before addressing her, even as those who would not attend to her that way were oftenly considered as being anti-Akpabio’s government.

Sources close to the Government House had said that government officials even feared and respected the then First Lady more than her husband who gave them appointments.

Many times described as the de facto Governor, Mrs Akpabio, it was alleged, led a teem of armed security officers to assault Umana Okon Umana, former secretary to government, after the latter’s relationship with her husband turned sour midway into that administration’s second term.

She was said to have ordered the security men to invade Umana’s office in his absence, and lock out staff members while he was still the government’s scribe. Although Umana was later sacked by Akpabio, following his then governorship ambition, Mrs Akpabio who had also perfected her hatred for Umana, referred to him as a “short man” who would never govern Akwa Ibom State during a PDP rally in Essien Udim Local Government Area.

Others who were also made to ‘honour’ the former governor’s wife in such derogatory manner were Alice Ekpenyong, a former member of the Akwa Ibom State House of Assembly who represented Mbo constituency, and Glory Edet, the state Commissioner for Women Affairs.

Mrs Ekpenyong was said to have knelt before Empress Akpabio at the Independent National Electoral Commission (INEC) office in Uyo, after being presented with certificate of return for winning election in 2011, while Glory Edet was captured on video waving a hand-held fan back and forth in order to move air towards the former first lady so as to cool her while she sat at the VIP section of the House of Assembly gallery during a budget presentation exercise by the then Governor Akpabio.

The Propeller Newspapers gathered that Mrs Akpabio even flagrantly crossed her boundary and interfered in the state’s legislative process. She was said to have attacked lawmakers of the former fifth Assembly and also summoned the then Speaker, Mr Sam Ikon, for refusing to pass into law a bill she had secretly sponsored through Mrs Alice Ekpenyong of Mbo State Constituency.