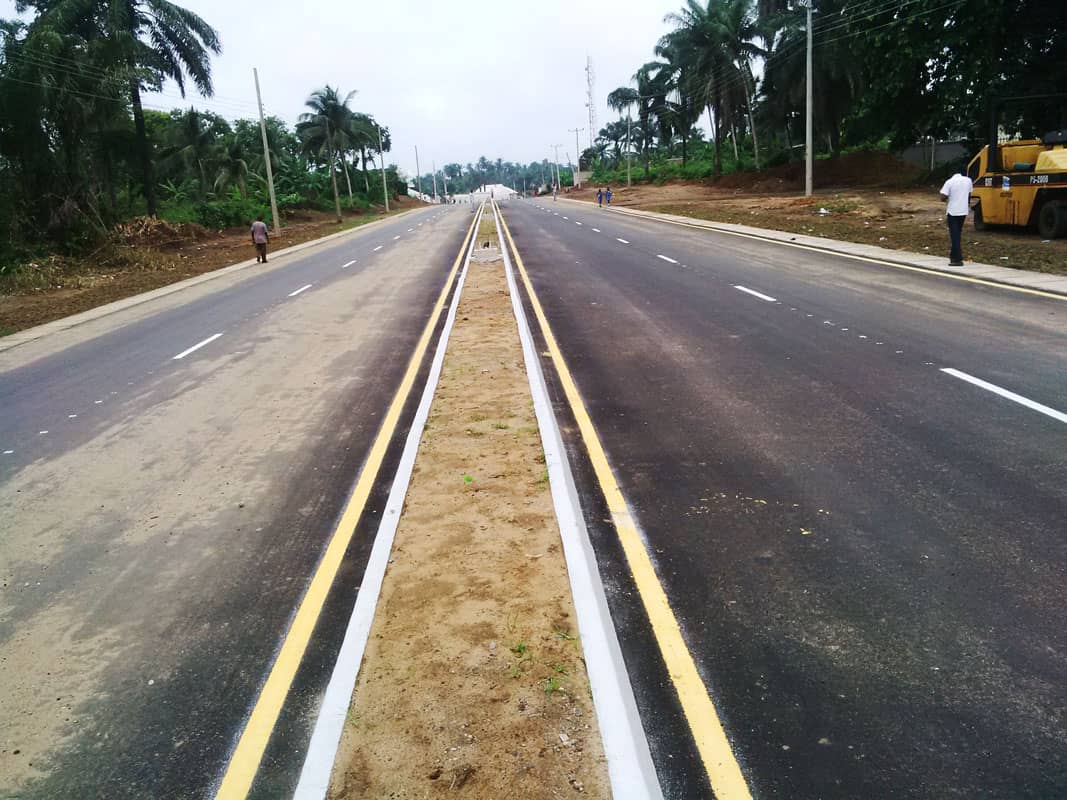 “There is a difference between a project and a monument. I came to commission projects, not monuments” – Gov. Udom Emmanuel

No question. Governor Udom Emmanuel is smarting away with a bagful of triumphs at all fronts. Winning has been his way if you check out.

Besides the confirmatory victory he has secured at the Supreme Court over his needlessly challenged victory at the 2019 governorship election, the successful levelling of the tall and stubborn mountain that the Uyo-Ikot Ekpene Road once was must be another golden feather on his catalogue of victories.

Baring what last minute finishing touches still remain and when the official schedule of commissioning shall be out, it can authoritatively be reported that the once always-in-the news 25km Uyo-Ikot Ekpene dual carriage way has been taken to the Four Point Sheraton Hotel, Ikot Ekpene, the initial terminal target of this important road that links Akwa Ibom to the east and beyond.

As the State Commissioner for Works, Akparawa Ephraim Inyangeyen put it during his last inspection in December 2019, “You now can drive on a dualized road from Uyo to Four Point Sheraton in Ikot Ekpene. This road that was once claimed to have been commissioned is actually going to be commissioned for the first time.”

To reach this point in the construction narrative of the road, there have been fireworks between the past and the present, between Truth and lies. Not until facts and figures expectedly surfaced from the stable of the Akwa Ibom State Ministry of Works, at a point the true story of the project was like the imagination of the true shape of the elephant by the proverbial four blind men, each of whom gave peculiar descriptions based on tactile deductions on what the gigantic mammal looks like.

Plainly, the storyline of the road divided Akwa Ibom into camps, the gullible ones relentlessly championing their arguments especially when tipsy from the crispy wine of sentimental politics.

But there were basically two popular strings of argument. The first, the most speculative, was about the extent to which work on the road had gone before its glamorous commissioning by the immediate past governor of the State, the copyright initiator of the project, Mr. Godswill Akpabio.

The offensive school of thought contended that by the time the project was commissioned on May 20, 2015 as part of the swansong of that administration, work had been fully completed on 18kms of the road. The second, which was generously seasoned with innuendoes and, according to pundits, driven by political stimulus of the 2019 election, centred on claims by Sen. Akpabio that his successor, Gov. Emmanuel, had jettisoned every good plan he (Akpabio) had for Ikot Ekpene Senatorial District (ISD), one of which was the situation of the Uyo-Ikot Ekpene Road.

Those who knew about Udom’s systematic commitment on the road and inclusive style of governance instantly and unpretentiously nullified the assumptions.
Incidentally, those hypersonic missiles which analysts said were signs of things to come in 2019 saw Governor Udom Emmanuel leapt out of his diplomatic zone of courteous taciturnity and vehemently countered the spurious claims.

Reprisals from government quarters were immediate, direct, hard and statistical. By this time, Gov. Udom has already proven that he is naturally not a man given to sentimental criticisms and inconsequential debates. Characteristically reticent, the sanctimonious bedlam by his predecessor must have forced the governor into tackling the flaming assumptions with facts and figures.
Among the reasons offered was that the project had not been abandoned but was simply a hapless victim of the unfortunate national economic meltdown that heralded his first term in office.

In corroboration, the Commissioner for Works, known to be vocal and bold with details, devotedly spilled the beans not necessarily to spite anybody but to edify the truth. Akparawa Inyangeyen contended that Akpabio’s administration did barely 8kms of the road before hurrying to commission it..

Buttressing his position in an interview on Inspiration 101 FM Radio, the Commissioner reasoned: “I want to, for emphasis, say that the structure that stood at Ikpe Annang that you turn to go to Essien Udim is at kilometre 15 and that building never went down until February, 2017 that government of Governor Udom Emmanuel sourced money, about N141 million and paid the owner of that property to take down that property. So it is not possible for the previous government to have gotten to kilometre 18 as claimed”.

On their part, the public had condemned the fanfare that attended the superficial commissioning of the uncompleted project as a dramatic farce; a facade of the reality. Hence, a latter statement made by Governor Emmanuel during presentation of his second term manifesto, the Completion Agenda”, Wednesday, January 16, 2019, at the Nest of Champions, fittingly formed the superscription to this article.

On claims of Ikot Ekpene Senatorial District being sidelined in matters of infrastructure, an aide to the Governor on media, Aniekeme Finbar, turned the protagonist when he exposed his youthful skin to political bedbugs as he unsparingly reeled out his boss’ massive developmental incursions across the nooks and crannies of the 10 local government areas of Ikot Ekpene Senatorial District within the period in question. By that exposition, commentators observed that the opposition-inspired controversies must have been timed to reach a crescendo in the razzmatazz of the crazy cross-carpeting that marked late 2018, which cumulative consequence history has recorded as a cataclysmic adventurism.

By the time of the theatrical commissioning, a breakdown revealed that only 6kms of the road was asphalted; 3kms at binder level; 5kms on earthwork; and there was a whooping debt port-folio of 2.3billion for compensation. Preponderate public position therefore was that the Uyo-Ikot Ekpene Road must have produced overnight billionaires in political circles.

Mr. Inyangeyen may have tightened the ropes with more revelations: “One of the greatest challenges we met on that road was that we didn’t meet any money that we were supposed to use to pay compensation. And these facts have to be given to the public with figures and dates because you cannot deny the truth”, he had told the press.

Superior argument proved that it was erroneous to have concluded for any reasons that work on the road was abandoned. It rather would have been diplomatic – or appropriate – to have observed that at some point, the work was presumably delayed, perhaps on Governor Emmanuel’s logic of paucity of funds that marked the recession of the period.

Whatever there was to argue, it must be admitted that work on the project received increased and accelerated pace towards late 2018 with improved funds flow, adjusted focus, or the sighting of the moon in the hovering political clouds of 2019 And it never stopped since then.

Historically, Nigeria’s uncanny political tradition does not place successors under any binding obligation to complete inherited half-done projects of their predecessors. With Akwa Ibom not blest enough to be exempted, except with the new template Gov. Emmanuel has set, the governor deserves logical commendations for upholding the principle of continuum not just on Uyo-Ikot Ekpene Road, but also on several other uncompleted projects of previous leaders of the State.

As a true leader, credit also goes to the governor for clairvoyant discretion in the choice of those to work with him. In the profound words of the two-term 40th U.S President, Ronald Reagan (1981-1989), “The greatest leader is not necessarily the one who does the greatest things. He is the one who that gets the people to do the greatest things.” It makes it simple to see and harder to disassociate the earnest and modest contributions of Akparawa Ephraim Inyangeyen as a dependable and capable ally to the success of story. Some call him – and deservedly so – the interpreter-in-chief of the governor’s infrastructural blueprint.

Counting from 2011 when the contract for the construction of the Uyo-Ikot Ekpene Road was originally awarded to 2020, it has now taken about eight years for the road to be brought to a logical conclusion. The Uyo-Ikot Ekpene Road is an economic nexus and connecting rod, one of the historically popular and commercially important roads that open the State to the outside world. From the centrifugal Ibom Plaza that it takes off, it is believed to link not fewer than 20 gregarious and local communities on its straight stretch to the ancient raffia city of Ikot Ekpene. It is all thanks to Mr. Udom Emmanuel.

Presenting his ministry’s performance scorecard covering months of January and August 2019 to Akwa Ibom State House of Assembly Committee on Finance and Appropriation towards the end of last year, Inyaneyen emphasized that the Uyo-Ikot Ekpene Road was an unfortunate victim of politics. “The Uyo-Ikot Ekpene Road has enjoyed quite some controversy. I call it the most politicised road in Akwa Ibom State.” The situation could have been different had Gov. Emmanuel not chosen to ignore the inherited culture of discontinuity and stuck to the principle of necessity in advancing his leadership philosophy.

Conversely, it would have been nothing new if Governor Emmanuel had offered endless justifications for failure to complete the Uyo-Ikot Ekpene Road. In truth and fairness, Udom’s achievement must not be limited to the Uyo-Ikot Ekpene Road project. An overview of Gov. Emmanuel’s first term in the Superior Performance Digest (Vol. 3, No. 2, May 2019), a publication of Office of Aide to the Governor on Research and Documentation, shows that 365 roads, 38 bridges were initiated with, many completed and some still ongoing at various levels, bringing the aggregate to 1759kms.

With the triumphant story of Ibom Air, 12 industries, 5 general hospitals, 4 power stations, the promising Ibom Deep Seaport and other prospective Iife-changing projects in the Completion Agenda envelop of the next four years, there can be no reasons for doubts in the great future.

For the emphasis, the triumphant pulling down of the mountain of controversies that the Uyo-Ikot Ekpene Road had been vindicates Gov. Udom Emmanuel, the ONLYGOD believer, when he promised Akwa Ibom people : “I did not come to complete monuments. I came to complete projects – life-touching projects”.