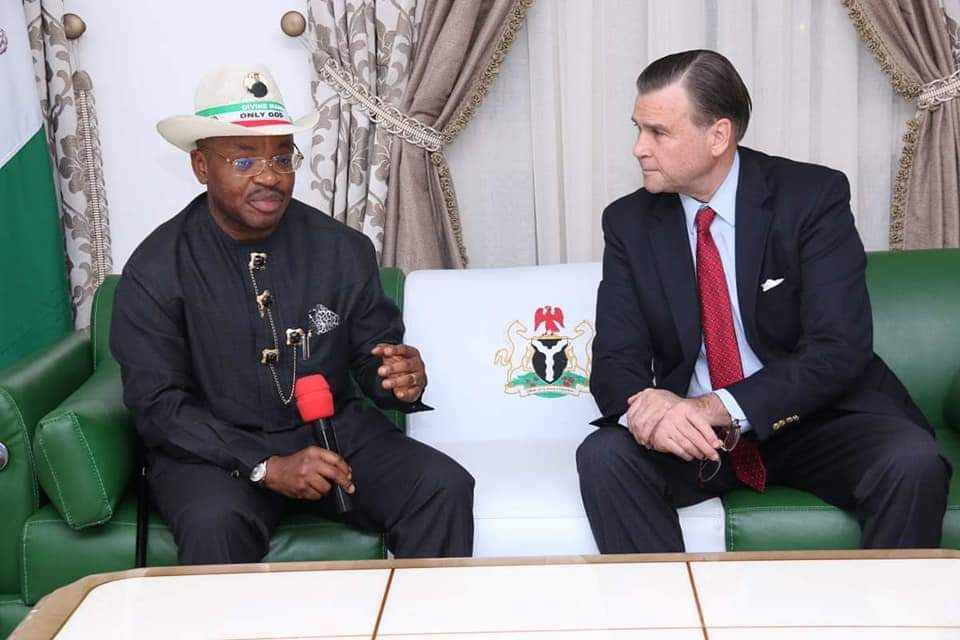 Governor Emmanuel said the use of the police by the opposition to intimidate key supporters of the Peoples Democratic Party, PDP with spurious and cooked up charges, among other issues, could lead to a breach of peace in the state.

Speaking while having in audience, the United States Ambassador to Nigeria Mr Stuart Symington at Government House, Uyo, Governor Emmanuel said that America has its largest investments in Nigeria, located in Akwa Ibom state, and traced the successes of the companies to the peace currently being enjoyed in the state.
The leader of APC in Akwa Ibom State Senator Godswill Akpabio had drawn widespread condemnations when he threatened, during several meetings with his supporters, to recreate a 2nd World War scenario in the State during the elections.

But Governor Emmanuel who is the first Governor produced by the core oil producing communities in Akwa Ibom, said only an unfettered participation of the people in a free and fair poll, would guarantee the sustenance of the peace.

Speaking further, he said that the bulk of the country ‘s income is derived from the oil resources as such the consciences of the rulers should compel them not to sacrifice justice and fair play on the altar of partisanship but to bequeath the country with legacies, assuring that Akwa Ibom would maintain its pride of place as the most peaceful state in the country.

He explained that Nigerians, the South South and Akwa Ibom state in particular desire a credible free and fair elections, adding that the state aside from Lagos has the highest foreign direct investment due to the peaceful ambience and urged the Ambassador to caution the ruling party on the noticeable act of desperation by attempting to compromise security and other agencies of government in acting their script.

Earlier, Mr Symington had enjoined Nigerians to uphold the democratic norms of fair play and eschew acts that might truncate the forthcoming elections in the country.

He said that election is one of the democratic processes that enable citizens to choose their Leaders and called on all the candidates from the various political parties to see their aspiration as a call to service not intimidation and rancour.

Mr Symington said that every citizen should be free to choose leaders of their own choice in a free and transparent poll and reminded the political class of the sacrifices of the past leaders to keep the unity of the country as a sovereign state whereby the fundamental rights of the citizens were respected.

The American Envoy said that the world is interested in Nigeria’s political development in view of its key role in Africa being one of the largest country with abundant economic potential.

He said the global community is conscious of the fact that only the citizens of the country can determine their destiny and not political parties and urged the political gladiators to place the interest of the people above self rather than attempt to compromise the electoral body and the security services to their advantage .

Mr Symington said that every Nigerian should ponder on how to salvage the economic and security challenges and not further polarize the country on regional, religious or ethnic considerations.
It would be recalled that the APC in Akwa Ibom, led by Senator Godswill Akpabio had drew widespread condemnation when he threatened, during several meetings with his supporters, to recreate a 2nd World War scenario in the State during the elections.
“We will capture Akwa Ibom like Hitler captured Poland, and when we are through, Warsaw will see war and war will see Warsaw.” Akpabio had alleged.
This position was corroborated by Nse Ntuen his kinsman and embattled member representing Essien Udim in the House of Assembly, who said to his supporters on live television that “this election shall be a do or die affair”.
Amidst the allegations of sewing of fake police uniforms to militants by the opposition as well other measures allegedly aimed at using the security agencies against the will of the people, Akwa Ibom PDP officials have in recent past, attempted to draw the attention of the international community to the situation.