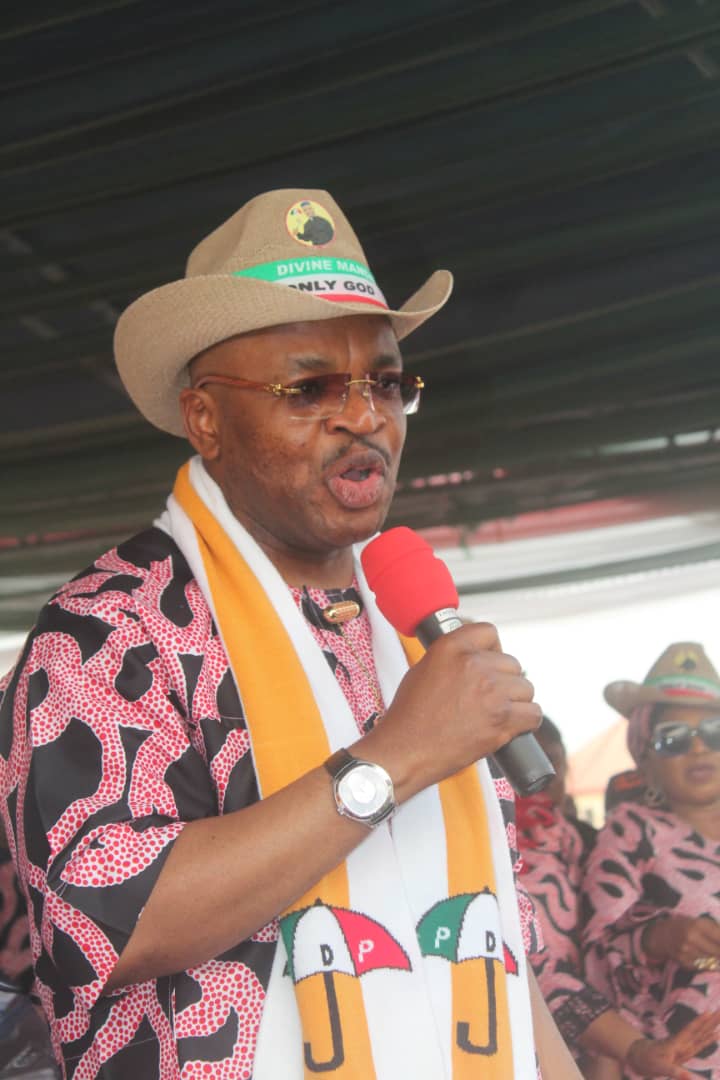 The people of Udung, in appreciation of the excellent performance of Akwa Ibom State Governor, Mr Udom Emmanuel, have sounded their resolution to continue supporting and give the Governor block votes in the forthcoming elections.

At the St Michael Primary School, venue for the gubernatorial campaign rally to Udung Uko LGA, the people eulogised the Governor for his superlative performances in the area within the three and a half years of his administration.

They thanked Governor Emmanuel for not playing politics with development, and expressed delight over the construction of the first ever tarred road since the inception of Udung Uko LGA 100 years ago.

Speaking, the Paramount Ruler of Udung Uko LGA, HRM, Ovong (Hon.) Bassey Etim Edet, commended Governor Emmanuel and described him as a promise keeper, saying “For over 100 years, we had no road, but that is a thing of the past now.”

On behalf of the women, the Commissioner for Civil Service Commission, Hon Mrs. Kenim Onofiok, noted that the first ever tarred road in Udung Uko was constructed by Governor Udom Emmanuel.

She pledged the commitment of Udung Uko people to continue to support and vote for industrialisation, infrastructure, sound education and quality road networks across the state.

In the same vein, Engr Asuquo Idung, who spoke for the elders, noted that Udung Uko had only one secondary school, but the Governor, in his bid to improve quality of education for the people of Udung Uko, added another one to make it two.

The Executive Chairman of Udung Uko, Rt Hon Okon Esin Oku, and the Chapter Chairman of PDP in Udung Uko, Hon Ita Edet Eyo, in their separate goodwill messages, poured encomiums on the Governor for opening and linking Udung Uko with other local government areas of the state.

They assured the Governor of victory in the forthcoming elections, saying, “PDP is the winning team. Your second term is sure in Udung Uko. Udung Uko is PDP. No party challenges that fact. The structure that supported the you in 2015 is still intact.”

Also speaking, former military governor of the state and Director General of Divine Mandate Campaign organisation, Air Commodore Otuekong Idongesit Nkanga, said that the forthcoming election is a referendum between light and darkness, peace and war, good and evil, and day and night.

He urged the people to choose light, peace, good and day by voting for Udom Emmanuel as Governor, Atiku Abubakar as President and all other candidates of the PDP.

Governor Udom Emmanuel, while addressing the mammoth crowd, said he came to reaffirm his commitment to open up Udung Uko.

He said he is committed to complete all ongoing projects in Udung Uko and start new ones, as well as ensure that the youths and women of the area are empowered, as his 8-point completion agenda is about the youths.

Over 450 people defected from the opposition All Progressives Congress (APC) to the ruling Peoples Democratic Party (PDP).

Leading the defectors, Engr Emmanuel Sam, a former chieftain of APC in the area, disclosed that they took the golden step from the APC to PDP following the high level of manipulation and intimidation in the broom party.

He said: “We initially moved to APC with the hope of producing a governor from Oro Nation in 2015 but we were deprived the opportunity, and the same fate repeated itself this year. We have decided that rather than support Nsima Ekere, we will file behind you following your historic performances in Udung Uko which has witnessed the first ever tarred road during hour tenure.”