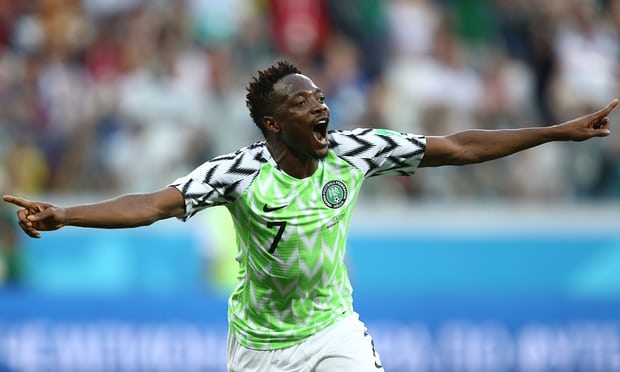 Nigeria have beaten Iceland 2-0 in Group D at the Volgograd Arena, lifting Argentina’s hopes of surviving at the World Cup as well as their own. Nigeria lost their opening match 2-0 to Croatia so have three points, while Iceland remain on the one point they earned in a 1-1 draw with Argentina.

After a goalless first half, Ahmed Musa scored a fine goal on a breakaway from an Iceland set piece, half-volleying home after controlling Victor Moses’s cross in the 49th minute. With a quarter of an hour to go Musa doubled the advantage, controlling a long ball from the back without breaking stride and galloping towards goal, beating Kári Árnason in the process. Having drawn Hannes Thór Halldórsson from his goal and seen the Icelandic keeper commit himself, Musa shimmied a couple of steps right and then blasted the ball past two covering defenders.

Iceland were then handed a way back into the game from the penalty spot, after the New Zealander Matthew Conger consulted VAR to confirm the substitute Tyronne Ebuehi had brought down Alfred Finnbogason. Unfortunately for Iceland, Gylfi Sigurdsson blasted the spot-kick over the bar.

For Nigeria’s first goal, the team broke on the counter and Ahmed Musa fires them into the lead on the half-volley. For the second goal, Musa doubled Nigeria’s lead with a fine solo goal.

It was a splendid goal from Musa. He took and controlled a long ball from the back without breaking stride and galloped towards goal, beating Kari Arnason in the process. Having drawn Halldorsson from his goal and seen the Icelandic keeper commit himself, he shimmied a couple of steps right and then blasted the ball past two covering defenders. And he did it all that at full speed – fantastic stuff.

The game between Nigeria and Iceland stayed at a goaless draw stalemate by the end of the first half.

After a couple of Icelandic crosses into the Nigeria penalty area, the ref blows for the interval. It hasn’t been a classic by any standards, but it’s entertaining enough. Iceland began and ended the half brightly, but Nigeria were impressive in between. Both teams are looking toothless up front and with better finishing, Iceland should be a goal or two ahead.

Both managers will, probably be happy enough with how their teams are playing, although both seem to be lacking quality in the final third.

Iceland get the second half started. Nigeria have made a change. Brian Idowu has been replaced by attacking right-back Tyronne Ebuehi. Nigeria begin the first half at a tremendous lick, with Oghenekaro Etebo brimnging a smart save out of Halldorsson with a low drive.

The first was also a terrific goal from Ahmed Musa. From an Iceland long-throw at the far end of the pitch, Nigeria cleared and galloped upfield on the break. Victor Moses sprinted up the inside right, before curling a cross towards the near post. Up in support, Musa controlled the ball with a wonderful first touch and slammed it past the Iceland goalie Halldorsson  on the half volley.