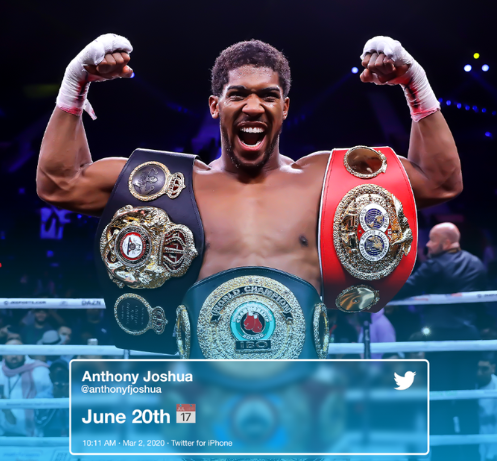 Bulgarian Pulev, 38, is the mandatory IBF challenger to take on Joshua, who holds the WBA, IBF and WBO titles.

Joshua won back the belts with a unanimous points victory over Andy Ruiz Jr in December.

“I am happy to have the opportunity to show the world how strong I really am,” said Pulev.

It will be Joshua’s first fight in the UK since beating Alexander Povetkin at Wembley in September 2018.

He was initially due to fight Pulev at Cardiff’s Principality Stadium in October 2017 but the Bulgarian withdrew after suffering a shoulder injury in sparring, with Carlos Takam stepping in to replace him at 12 days’ notice.

Fury beat Deontay Wilder to claim the WBC title last month, meaning the British heavyweights now hold all of the division’s belts between them.

However, American Wilder has triggered a rematch clause, meaning a third Fury vs Wilder contest will take place before any potential bout between Fury and Joshua.

Pulev, a former European heavyweight champion, has suffered just one defeat in 29 bouts, a fifth-round knockout by Wladimir Klitschko in November 2015.

He beat Britain’s Hughie Fury on points in an IBF final eliminator in Bulgaria in October 2018, his first fight since pulling out of his original meeting with Joshua.

His last bout was another unanimous points victory, against American Rydell Booker, in November.

Two weeks ago the BBC Sport boxing team sat in Bob Arum’s office and, unprompted, he started telling us how his fighter Kubrat Pulev “will knock out Joshua”.

I guess he would say that, but there is no doubt Joshua’s humbling at the hands of Andy Ruiz Jr on 1 June has drastically changed how he is viewed.

There are questions to answer still. Joshua boxed beautifully in his rematch but looked a little uneasy whenever he was pressed. Will Pulev’s team go in on the front foot in a bid to upset the odds?

Pulev could ultimately wreck the dreams of British boxing fans who have now been promised a Fury-Joshua bout for all the belts. There are so many agreements needed before that becomes a reality.

In many ways, a Pulev win would make about for all four belts far easier to arrange. Arum would control Fury and the Bulgarian, so he would only need to strike deals within his own Top Rank office to secure the historic contest.