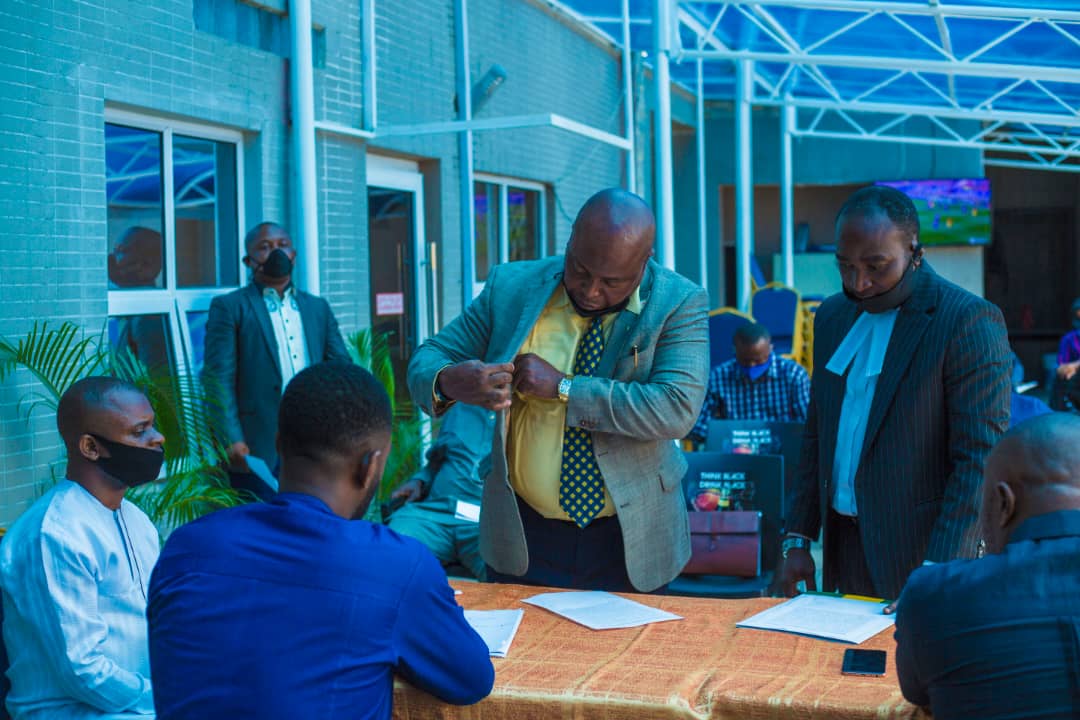 In what publishers in the state have described as ‘a breath of fresh air’ in the newspaper publishing business, an umbrella body that would promote, defend and cater for the welfare and interest of publishers of state-based newspapers ‘Amalgamated Newspaper Publishers Association (ANPA) has been inaugurated in Akwa Ibom State.

The 8 member exco has Mr. Osuinyi Abasi Alfred, publisher of EageEye Newspaper as it’s Chairman. Other members of exco include, Mr. Ofonime Isong, Publisher of Prime Voice Newspaper, Vice-Chairman, Mr. Ubong Ettetor, Publisher of Ibom Nation Newspaper is the Secretary of the body, while the Publisher of Niger-Delta Post, Mrs. Ekaette Joseph was sworn-into office as Treasurer.

The well attended inauguration ceremony held, Tuesday at the Wattbridge Hotel and Suite, Uyo which attracted a large gathering of active newspaper publishers in the state, was also watched by the Special Assistant to the Governor on Research and Documentation, Mr. Essien Ndueso, Special Assistant to the Governor on Local Media, Mr. Emmanuel Sam, Personal Assistant to the Governor on Media, Rev’d Richard Peters, Chairman, Akwa Ibom State Council of Nigeria Union of Journalists, NUJ, Comrade Amos Etuk, a former Chief Press Secretary to Ex-Governor Victor Attah, and senior Mass Communication Lecturer at Akwa Ibom State Polytechnic, Dr. Udeme Nnana, as well as a Mass Communication Lecturer with the International Institute of Journalism, IIJ, Dr. Tom FredFish, Mr. Ikotidem of AKBC, among other stakeholders in the media industry.

The inauguration ceremony was performed by Barr. Samuel Etuk, who is also a member of ANPA.

Setting the tone for the inauguration ceremony, the BOT Chairman, Comrade Ernest Akpan, said the body was borne of out the need for newspaper proprietors in the state to interface and collaborate for the overall objective of promoting an egalitarian society, and as well use the platform to chart pathway for the general wellbeing of members.

“As responsible newspaper proprietors, there is need for us to come together to contribute out quota to nation building as gate keepers of newsprint which is critical to setting agenda for our common good”.

Mr. Akpan who is the Special Assistant to the Governor on Project Monitoring, said he was happy that the association was not an assemblage of those he described as ”audio newspaper publishers”, but a composition of committed and active newspaper publishers whose tabloids are seen regularly on the newsstands in the streets.

He thanked the publishers for embracing for embracing the new body and promised better days for members as the new exco takes off.

In his remarks, the Special Assistant to the Governor on Research and Documentation, Mr. Essien Ndueso saluted newspaper publishers on their decision to come together and form an umbrella body that would promote their wellbeing and as well help in agenda setting for the good of the society.

Mr. Essien, a pioneer Chairman of Sensor Newspaper Chapel of the NUJ, the first private newspaper house in the state to get a chapel, charged the exco of ANPA to set in motion modalities to would create incentives to sustain members of the group, and sued for unity of purpose among members.

The Governor’s aide who described Governor Udom Emmanuel as media friendly, commended the newspaper publishers for supporting the government’s development agenda, and assured of better days ahead.

On his part, the Governor’s aide on Local Media, Mr. Emmanuel Sam harped on the need for ANPA to work assiduously towards ensuring that all newspaper publishers in the state are carried along. He assured of the support of his office to enable the body succeed.

“This is a great move and I’m part of this move., and i appreciate this. Let this exco be a reconciliation team that would carry everybody along”

Also speaking, the State NUJ boss, Comrade Amos Etuk charged the Asuinyi Abasi led exco of the body and membership to work as a team in order to achieve its set goals and objective. He commended the newspaper proprietors for their ability to stay afloat in the newspaper publishing business in the state, despite the challenges faced in the business, noting that the job requires passion for consistency to be sustained.

” For you to succeed in this publishing business, if you don’t have passion, you can never get it’ll right. Once you have the passion, consistency must be there”.

Mr. Etuk scored the print media industry in the state high in the area of setting agenda for good governance, and enjoined members sustain the tempo.

In a goodwill message, Dr. Udeme Nnana described the birth of the association as a welcome development for newspaper publishers in the state.

In his inaugural speech, the Chairman of the Association, Mr. Osuinyi Alfred, a University of Nigeria, Nuskka graduate of Mass Communication thanked the publishers for the confidence reposed in him and his exco members, and promised not to disappoint them. He assured that his exco would work as a team to advance the wellbeing and interest of newspaper publishers in the state.

He maintained that the group is out to project the ideals of good governance, growth and development of the state and its people.