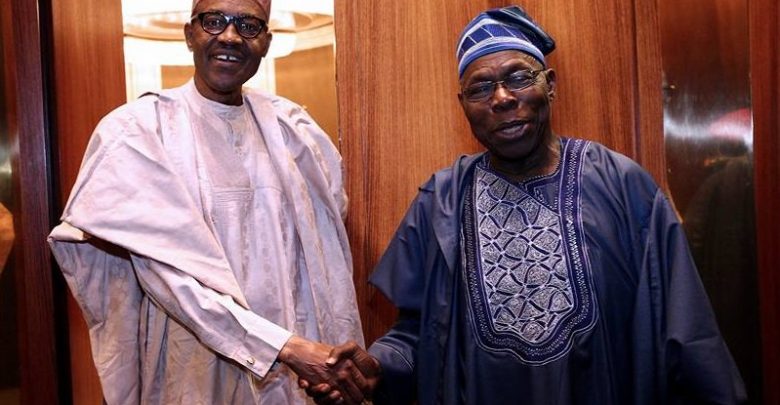 Mr Buhari is seeking re-election on the platform of his party, APC. The presidential and National Assembly elections will hold on February 16.

In an open letter titled “Point for Concern and Action” which he distributed to journalists at a press conference held at his house at the Olusegun Obasanjo Presidential Library, Abeokuta, Mr Obasanjo also alleged that the president was acting like a former military dictator, Sani Abacha.

“Buhari has succeeded in deceiving us the first time and we will be fools to allow ourselves to be deceived the second time,” Mr Obasanjo wrote.

“Buba Galadima, who knows Buhari very well as a confidant and National Secretary of Congress for Progressive Change,CPC, the Buhari’s party before it joined in forming All Progressives Congress, APC has warned us this time around that no matter what he promises, he cannot change his character and attitude.”

Mr Obasanjo was one of the millions of Nigerians who supported Mr Buhari in the 2015 presidential election. He has since withdrawn his support for the president, accusing him of incompetence and nepotism.

In his letter, the former president said Mr Galadima “describes him (Mr Buhari) as inflexible, insincere, dubious, intolerant, never accepts responsibility when things go wrong and impervious to reason and advice for change. If you cannot change your mind, you cannot change anything is the assertion of George Bernard Shaw.”

Mr Obasanjo then claimed that what is happening in Nigeria under Mr Buhari can be likened to what Nigerians witnessed under a late military dictator, Sani Abacha.

Mr Abacha, who ruled Nigeria between 1993 and 1998, died in office while trying to perpetuate himself in office.

“He went for broke and surrounded himself with hatchet men who on his order and in his interest and at high costs to Nigeria and Nigerians, maimed, tortured and killed for Abacha. Buhari has started on the same note on the same path in mad desperation,” Mr Obasanjo claimed.

He then alleged that the president and his party are recruiting collation officers who are already awarding election results.

“It is the sole reason he has blatantly refused to sign the revised electoral bill into law. His henchmen are working round the clock in cahoots with security and election officials to perfect their plan by computing results right from the ward to local government, state and national levels to allot him what will look like a landslide victory irrespective of the true situation for a candidate who might have carried out by proxy presidential debate and campaigns.”

He said the current plan is to drape the pre-determined results with a toga of credibility and also use violence of unimaginable proportion which will be unleashed in high voting population areas across the country to precipitate re-run elections.

“We are monitoring them and we call on all democrats across the world to keep an eye on the unfolding anti-democratic agenda of President Muhammed Buhari. This is the time for preventive measures to be taken otherwise Nigeria may be presented with a fait accompli with impunity and total disregard of all pleas.”

The presidency is yet to react to Mr Obasanjo’s latest outburst.