All candidates who sat for the just concluded 2018 West African Senior School Certificate Examinations (WASSCE) in the state have been urged to check their results at the respective available channels and pay deaf ears to idle gossips by sponsored media hirelings who are all out to mislead the public.

The Senior Special Assistant to the Governor on Education Monitoring, Mrs Idongesit Etiebet who confirmed this to our reporter in her office dismissed the widespread rumours making the rounds in some quarters that result of candidate of Akwa Ibom State who wrote the recent WASSCE would not be released due to the State’s outstanding debt to West African Examinations Council.

Mrs Etiebet who corroborated an earlier statement by the Commissioner for Education, Prof. Victor Inoka and that of Information and Strategy, Mr Charles Udoh, called on the general public to ignore such rumours as all Governor Emmanuel, being a responsive and responsible leader had fulfilled his part of obligation to the examinations council.

Maintaining that Mr Emmanuel considers all funds expended on education as major investments, she charged all detractors to join hands with the Governor in building a better Akwa Ibom State.

The SSA on Education monitoring also disclosed that civil servants in Akwa Ibom state have been paid June 2018 salaries, even when federal government Allocation -FAAC has not been released to States by the federal government.
She applauded the commitment of Governor Emmanuel in the payment of staff’s remuneration, pensions and gratuities.

She also commended the State government for the massive construction/rehabilitation of School blocks and other infrastructural developments recorded in other sectors.

Recall that last two weeks, the State Government under the able leadership of Governor Emmanuel had released almost 200million naira subvention, to various heads of public primary and secondary Schools in the State to take care of logistics and other expenses in running the school, to avoid hidden charges on pupils and students in public schools. 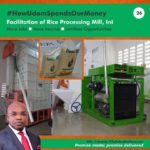