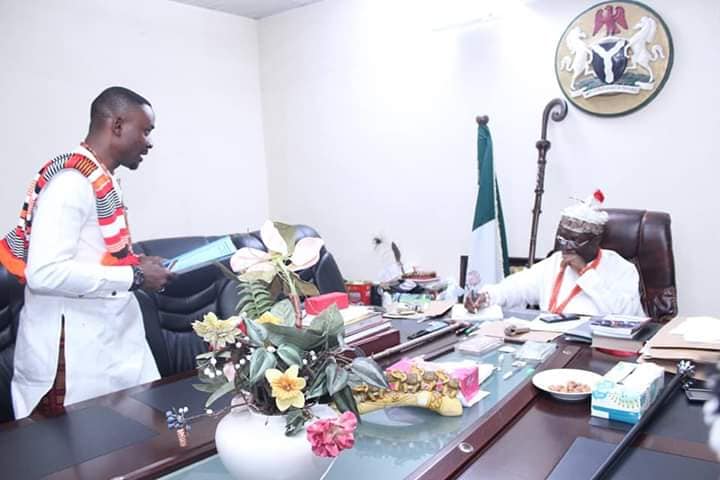 The Patriarch of Ibibio people Worldwide, Oku Ibom Ibibio, His Eminence, Nteyin Solomon Etuk has called on Ibibio people to take steps towards restoring their indigenous language as the first language in their language arrangement.

The Oku Ibom Ibibio gave the advice on Thursday when a Sociocultural organization, Bring Back Our Language, BBOL paid a courtesy visit on him in his palace.

His Eminence Etuk said it was disheartening that in many Akwa Ibom homes which he noted should serve as the bedrock for language learning, speaking Ibibio language has been banned by parents.

He pointed out that such situations are not only embarrassing but serve as the starting point where the culture and identity of Ibibio person is destroyed.

Nteyin Etuk added ” You won’t see other ethnic groups joke with their indigenous language as the way we do. They proudly speak it everywhere. And that has contributed to their unity and prosperity. Language is powerful and there are deep things associated with it.

” English language should rather be the second language. Speaking English on all occasions does not make you intelligent. There should be a peculiar occasion or setting for speaking it. Don’t mortgage your language for English language. They are not superior to you. And the change must start from homes”.

The traditional father pointed out that if success must be recorded towards making Ibibio language stand out, it was imperative for the traditional institution, government, groups and individuals to show interest in addressing the challenge.

He expressed readiness to support BBOL towards their drive to sensitize the public on the need to restore the language to its prideful position.

While charging the group not to derail on focus, Oku Ibom Ibibio commended the group over their vision, drive and composition especially as members are drawn from all ethnic groups in the State.

Earlier, the Leader of the group, Mr Mike Umoh said the group was concerned over the prediction by UNESCO that Ibibio language among other dialects in the State will go extinct by the year 2050.

He said the group in recent times have taken steps to contribute their quota towards addressing the challenge and now wish to take a step further with robust campaign.

Umoh who sort the blessings and support of Oku Ibom Ibibio said such support will spur them to work towards recording successes.