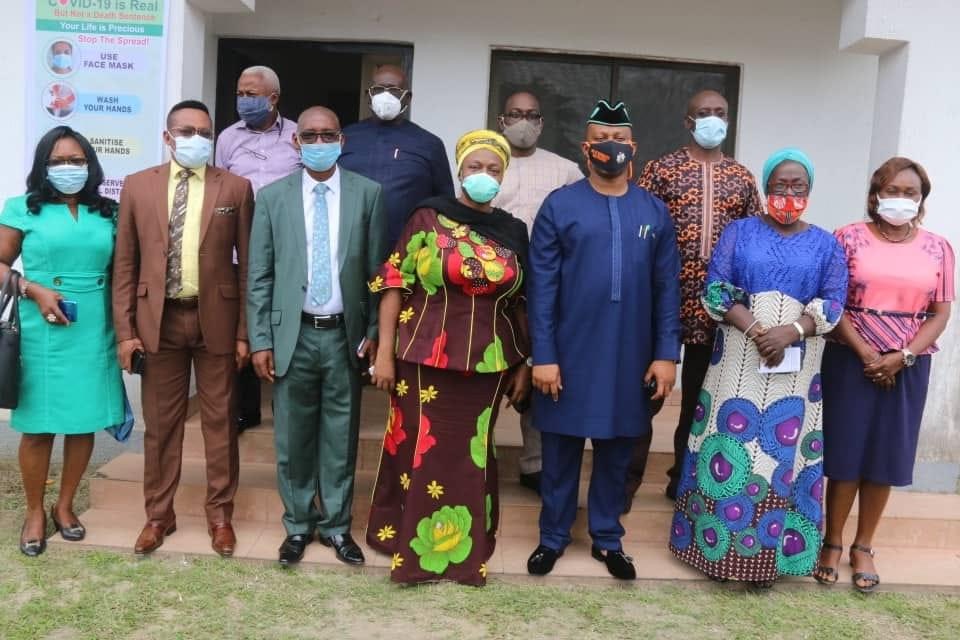 The Commissioner for Information and Strategy, Comrade Ini Ememobong has charged the Ethical and Attitudinal Re-orientation Commission, EARCOM, to embark on heightened campaign towards marketing the 8 Point Completion Agenda of Governor Udom Emmanuel.

Also to be dissected for marketing by EARCOM is the Dakkada Creed, towards activating the virtue of Greatness embedded in the pledge to the people.

The Information Boss gave the task early today, Thursday 13th August 2020, in Uyo, during his familiarization tour of EARCOM as part of his ongoing visits to Parastatals under the Ministry of Information and Strategy.

Comrade Ini Ememobong who said he was in the Commission for an Advocacy meeting urged EARCOM to vigorously utilize its mandate to re-orientate the mindset of the people towards positive perception of government policies and programmes as encapsulated in the eight planks of the Completion agenda.

Reiterating that new ideas are not easily imbibed without much persuasive strategies, the Information helmsman charged EARCOM to push on the good work so far to ensure that Akwa Ibom people imbibe the right perception to appreciate the giant strides of Governor Udom Emmanuel in such sectors like Aviation, with Ibomair making waves in the industry and all other sectors.

He said with greatness already inbuilt in all Akwa Ibom people as enunciated in the Dakkada Creed, all the people needed was activation of the virtue and urged EARCOM to take up the task as part of its reorientation programmes.

Comrade Ememobong said the forebears of Akwa Ibom had lived the dream of state creation which we are now enjoying and therefore behoves on the present generation of Akwa Ibom to live the greatness of state ownership by participating positively in the operations of the state as dependable partners in the state governance.

Noting that it would be a total waste of time and energy to craft public policies that would not be positively received due to negative public perception, the State Spokesman implored EARCOM to embark on campaigns to shape the minds and perception of the public for the collective good of both the government and the governed.

He frowned at a situation where a Nigerian would behave well once he lands Heathrow Airport, but goes out of order once he lands Lagos Airport, citing such awkward practices like dropping garbage on the ground beside the receptacle bin instead of putting it inside the bin, emphasizing that, these are Attitudinal issues that need reorientation.

Speaking on the creation of awareness on the COVID 19 pandemic, the Information Boss called for aggressive propagation of the COVID 19 Protocols to enable the people imbibe and observe all the Protocols and guidelines to forestall the spread of the disease.

He used the occasion to implore parents to provide their children in the exit classes returning to schools with face masks as they would not be allowed to sit for the West African Examination, NECO, and NABTED without it,
warning that, It amounts to an economic crime against the State, for any Parent not to equip a child with face mask to write WAEC.

He pointed out that, the State government pays heavily to enable Akwa Ibom children write the examination free of charge adding that, the Government can trace and prosecute parents of kids who fail to sit for the examination.

While welcoming the Commissioner for Information and Strategy, Comrade Ini Ememobong, along with his entourage, the EARCOM Chairman, Dr Dorothy Thompson had congratulated Comrade Ememobong on his appointment describing him as a square peg in a square hole.

Dr Thompson thanked Governor Udom Emmanuel for identifying and appointing Comrade Ememobong into his cabinet and described his deployment to the Information Ministry as strategic and a blessing not only to EARCOM but the entire Information sector of the stste.

She noted that, EARCOM is a homecoming for Comrade Ememobong, who she said, has been an EARCOM Ambassador and Resource person for many public and Reorientation campaigns of the commission.

She pledged the readiness of the Commission to partner the Ministry to propagate the programmes, policies and vision of the State Government.

The occasion was attended by Directors of the Ministry of Information and Strategy and Members of Board of EARCOM.