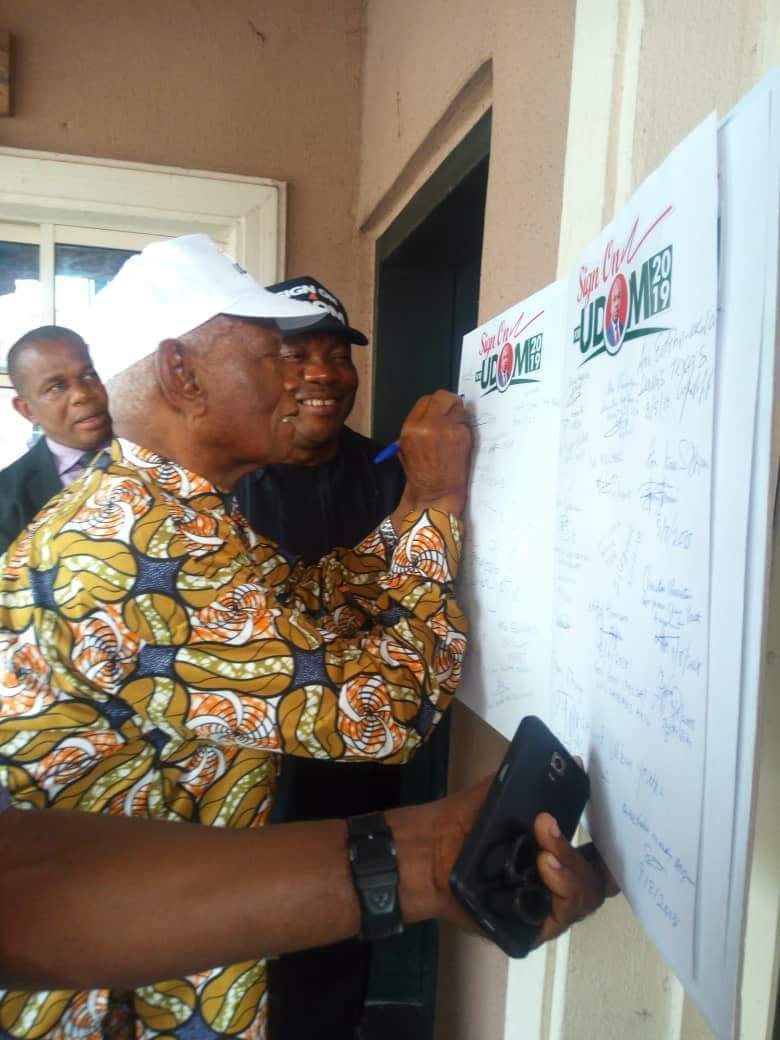 Stakeholders of the Peoples Democratic Party (PDP) in Essien Udim Local Government Area have condemned in strong terms the misleading information which should at best pass for a beer parlour conversation, but caption “Essien Udim Councillors Beat Prince Ukpong Akpabio”, describing the act as the most crude form of spewing falsehood as the writer and posters who are agents of disunity and fifth columnists were on the course of enjoying a mud bath.

Briefing the Newsmen after the Stakeholders meeting at Chief Afangideh’s Office, Ikot Ekpene, the Honourable Commissioner for Investment, commerce and Industry, Barrister Prince Ukpong Akpabio, said “ Our attention have been drawn to a news item peddled around social media even before the end of our meeting that I was beaten and our Political Leader fainted. Although it is not in my character to join issues with ignoble people who are bent on dragging our hard earned image to the mud, but for purposes of emphasis, clarity and to put the record straight, I, Barrister Prince Akpabio was never beaten and Chief Afangideh never fainted during the meeting and at no point did the councillors declare support for APC or any of its Candidates, instead we unanimously agreed to plan together in order to give the leader of our Party; Mr Udom Emmanuel and the Divine Mandate Campaign Team a rousing welcome on the 11th February, 2019 when the team will visit the area for campaign flagship”.

Explaining further, he said “today Thursday, the 24th Day of January, 2019, we, the entire stakeholders of Essien Udim came together at the instance of the political leader, Chief Michael Afangideh, to deliberate on the way forward regarding the forthcoming Divine Mandate Campaign visit in Essien Udim. The proposed visit, as we all know, will signpost Governor Udom Emmanuel’s reelection campaign in the area. At the meeting, positive plans were made, Committees and Sub-Committees were formed to aid the successful hosting of the team on the slated date”.

“I wish to state unequivocally that those peddling such ignoble and misleading information, with the aim of putting the PDP family in disarray, are agents of the broom party and they have failed woefully. We know them and we want to let them know that we are not perturbed by their evil antics, and we will neither be nor relent on our effort to unite as one big family. It is instructive to note that, PDP is waxing strong in unity and prosperity in Essien Udim, that is why they are jittery about our successes recorded and more to be recorded “.

“We advice the perpetrators and purveyors of evil news to try something else because PDP remains stronger and we are ready to receive Governor Udom Emmanuel, his team and the entire Divine Mandate Campaign Organization in Essien Udim and their campaign of calumny against us shall never stop us from mobilizing our people to vote en masse for PDP and Gov Udom Emmanuel to return for a second term”…he added.

“Finally, we urge Essien Udim people and Akwa Ibomites at large to discountenance the concoctions against me and our Political Leader, as we have forgiven the ignorant and insolent rumormongers who churned such garbage against us. Indeed, this is one of the many signs of desperation exhibited by this group of drowning people”.