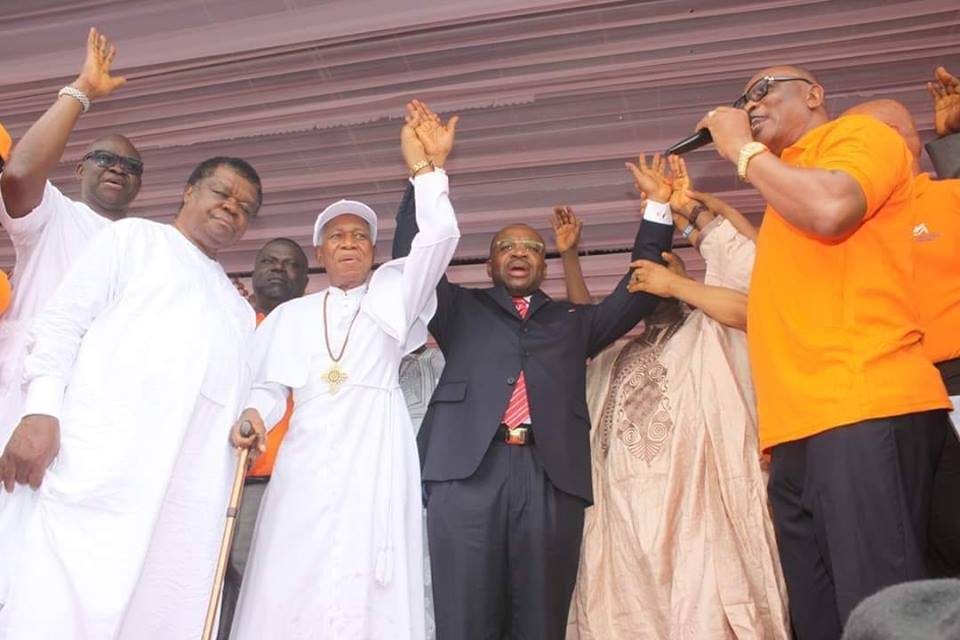 TEXT OF PRESS BRIEFING BY THE FATHERS OF FAITH ON THE MILITARIZATION OF AKWA IBOM AHEAD OF THE MARCH 9, 2019 GUBERNATORIAL AND STATE HOUSE OF ASSEMBLY ELECTIONS, HELD ON TUESDAY, MARCH 5, 2019

Gentlemen of the press, it is with a heart full of gratitude to God Almighty that we are pleased to address you this afternoon. As citizens of Akwa Ibom State and Fathers of Faith in the land, we cannot but give glory to God for the peace and progress that our state has witnessed in the last four years.

It is against the backdrop of the socio-economic development that has put Akwa Ibom in national and global spotlight that we had expected that our political transitions by way of the 2019 general elections will be conducted in an atmosphere of peace, devoid of threats, intimidations and brigandage.

However, events that have characterized the electioneering process have left many peace-loving citizens wondering why we should come this low in the quest for political relevance. This unpleasant political atmosphere came to the fore since the uncommon defection of our son and former Governor, Senator Godswill Akpabio from the Peoples Democratic Party, PDP, to the All Progressives Congress, APC, on the 8th of August 2018.

Although, as an individual, Senator Akpabio reserves the right to freely associate with whatever political party he deems fit for himself, his unguarded utterances have however, ignited unhealthy rivalry among members of the different political parties in the state. Key among his below par utterances is the infamous ‘Warsaw Saw War’. Ever since he made that statement, things have not remained the same in our polity.

As if to confirm the belligerent disposition of Senator Akpabio and his party the APC, the invasion of Akwa Ibom landscape by the military, shortly before and during the last Presidential and National Assembly Elections of February 28, 2019 sent a wrong signal to our people. There were reports of harassment, intimidation and physical assault of the electorate in parts of Akwa Ibom State, especially in Ikot Ekpene Senatorial District, where Senator Akpabio stood elections. As we speak, some of the political actors arrested by men of the Nigerian Police and the military are still held in custody without any charge brought against them in the court of law.

As we prepare for the Governorship and State House of Assembly Elections next Saturday, gentlemen of the press, unfolding events of the last few days have given further reasons for concern. It has been observed that the Akwa Ibom landscape is gradually becoming militarized. Troops have been moved into the State like never before. Men of the Nigerian Police have also become battle-ready. This militarization of our state would have been understandable and apt if we were in a war situation. For God sake, we are not at war, and therefore, we condemn this suspicious deployment of soldiers and men of other security forces to Akwa Ibom State. Commanders and other hierarchy of security forces should remember that professionalism is the hallmark of their callings, and they are never expected to turn their guns against a peaceful people, with whose monies the guns are bought.

As a concerned body, we call on President Muhammadu Buhari to urgently look into the situation before it degenerates into an ugly scene. We recall that only recently , when the Vice President, Prof Yemi Osinbajo visited Akwa Ibom State to interact with members of the APC, he was quoted as saying that Akwa Ibom would be forcefully taken over by the APC.

On the flip side, the comments by the National Chairman of the APC, Comrade Adams Oshiomhole tend to underscore why our state is being militarized ahead of the Saturday polls.

We wish to implore Prof Osinbajo, that as a Christian and a Pastor for that matter, he should understand that 99.9% of Akwa Ibom citizens are Christians, and look up to someone like him to not only stand up for the truth but should also defend fellow Christians in time of persecution. Mr. Vice President, Akwa Ibom people count on you in this hour of need.

Let it be known that as Fathers in the land, we would continue to do our best by imploring all parties not to see politics as a do or die affair. Rather, politics should be seen as avenue to serve the people. And in a democracy, people are elected into positions based on the grace of God and the free will of the people. Therefore, it is our well-considered opinion that no one should forcefully impose him or herself on the people.

On this score, we call on all citizens and residents of Akwa Ibom State to peacefully go to their polling units and cast their votes for the candidates of their choice on Saturday, March 9, 2019, bearing in mind that God is on the side of Akwa Ibom State.

Thank you for listening and God bless us all!