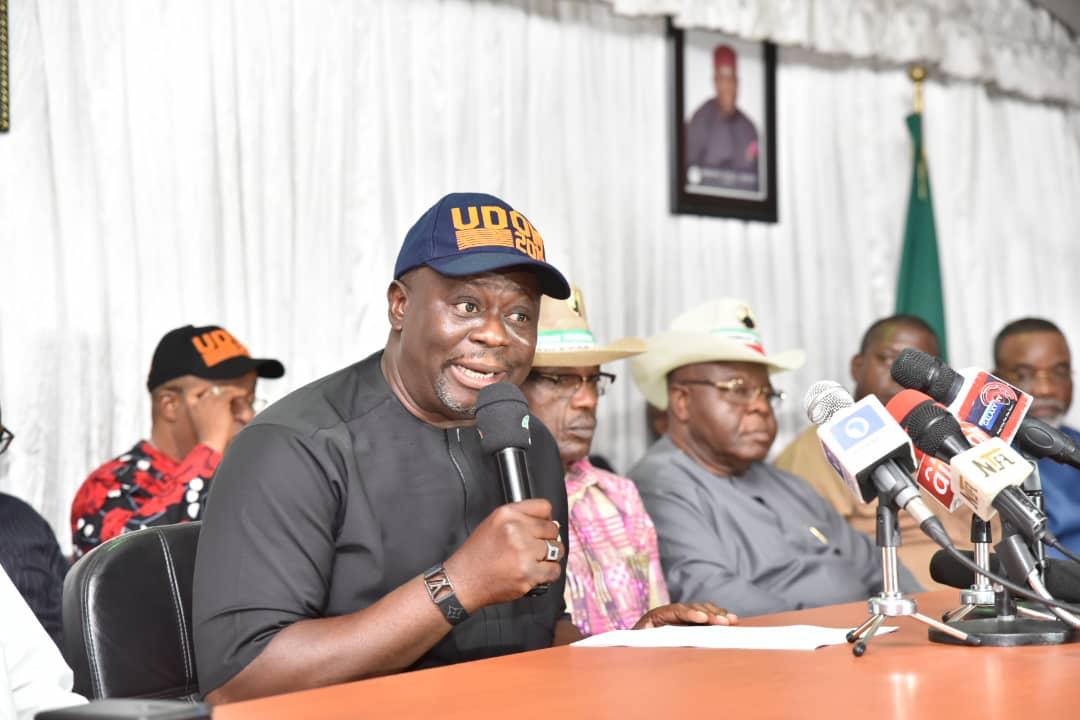 The statement signed by Mr. Ini Okopido demanding that the President should declare a state of emergency in Akwa Ibom state and remove the democratically elected government of Governor Udom Emmanuel is a testimony to the veracity of our earlier announced intelligence relating to the motive of the APC in instigating violence in our state. We had mentioned that information available to us was to the effect that the chieftains of the APC are planning to instigate violent disruptions of the wheels of governance and provoke the civilian populace to react in like manner, so as to stimulate their call for the declaration of a state of emergency immediately or the rescheduling of elections in Akwa Ibom state. The APC and her chieftains have always boasted of their total reliance on federal might, which they see as their only highway to power. Having found Akwa Ibom as a very peaceful state and with no tangible reason for increased deployment of security forces to the state, the APC and their conspirators( both indigenous and exogenous) had mapped out plans to instigate crisis in different areas of the state. This plan is not new to us, as we are aware of every step of their plans and will continue to alert the public.

On the invasion of the House of Assembly and the complicity of the Nigerian Police, it is important to state that the constitution of the country which is the operational code for all public and private persons, is clear on the steps expected of a presiding officer of any parliament, when a member of the parliament defects without any lawful justification. In our case, the Speaker of the State Assembly, we have been reliably informed had applied restraint in the declaration of the seats of the law makers until they approached the courts and judgement was given against one of the law makers and the rest teamed up with him in pursuit of an unlawful course, of attempting to prevent the House of Assembly from undertaking its legal responsibilities. It is common knowledge that as at the time the speaker acted in declaring the seats of the former members vacant, there was no subsisting injunction or legal impediment restraining him or any other person from acting in that direction. It is therefore not in doubt that the declaration of the vacancy of seats of the former members was, is and remains constitutional, lawful, legal and extant and there is nothing the APC can do about it. To compare the Akwa Ibom example with that of the National Assembly or any other assembly for that matter, is completely untenable and infantile. Juristic persons are accountable to the law and the donors of their mandate. How they choose to execute the demands of their office within the ambit of law is their prerogative. There is no valid excuse in law that since parliament A has undertaken an illegal act, or accommodated the commission of illegality, that parliament B is bound to do same.

We were not shocked to read the chairman accuse the Governor of not being sound in mind. It is in their character to engage in gutter banter and mud bath, which is very alien to us and our clime. But if public perception is to serve as the guide, the people who orchestrated and infact shamelessly recognized three former lawmakers who claimed to have sat and impeached a speaker, are those whom the citizenry want their mental health urgently examined. This attention must critically examine not just their intelligence quotient, but their moral quotient. The public has over the time witnessed the presence of unquenchable greed and the absence of basic intelligence and common sense in these characters, who have now congregated themselves into the APC, in a desperate conspiracy to grab power at all cost and by all means. We will be advocating that INEC should make psychiatric examination a precondition for holding executive positions in political parties. This will help to check the incursion of clothed deranged persons into the political turf.

We call on our supporters to remain calm even in the face of unprovoked aggression by the war-minded members of the opposition. We call on security agencies to conduct their duties professionally, without political leanings.

We commend the Speaker of the aakwa Ibom State House of Assembly, Rt. Hon. Barr. Onofiok Luke for his maturity in handling these provocations; the remaining 20 members of the House of Assembly deserve special commendation for their courage and strength of character.

The cynosure of good governance in Nigeria, Governor Udom Emmanuel has exhibited great restraint and maturity in the handling of the many issues that arose alongside the well choreographed and instigated crisis that was visited upon the state parliament by the APC. We know that Akwa Ibom people will continue to invest their future in the leadership of Governor Udom Emmanuel, conscious of the huge benefits that have accrued in the past three years and the others which are enroute.

We call on the federal government to ignore the ill-informed demand for the declaration of a state of emergency by the APC and instead concentrate her efforts in fighting insurgents and the protection of our soldiers and other security forces, who are fighting to protect our sovereignty.

We join the very popular demand for the redeployment of the APC-sent Commissioner of Police, Mr. Kimo whose duty in Akwa Ibom had finished with the police backed desecration of the sanctity of the House of Assembly. We appeal to the Inspector General of Police to post to our state a thoroughbred professional as Commissioner of a police to assist in the maintenance of law and order.

We are certain that when the elections are over, everyone will join us in the victory song “Yahweh”.