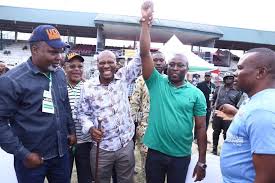 Known by all and sundry, Obong Emmanuel Ukpong-udo had calve unbeatable niche for himself in Ikono/Ini Local government and Akwa Ibom state.

His nickname Macaire is always on the lips of his numerous followers for efficacious reasons. A delve into his antecedents will spring unimaginable feet he had achieved in the oil & gas sector as a Health, Safety & Environment Consultant for over 19 years of productive service. He was nicknamed “Udo Eka Jesus” because of his philanthropic enigma, Macaire tenders milk of kindness to everybody irrespective of political affiliation which is worth being noted

The popular philanthropist who flawlessly defeated his opponents and clinched to victory in the last party nomination is seen as a nightmare by the opposition party. At the mention of Obong Emmanuel Ukpong-udo, his opponent shivers knowing that his undeniable capacity is second to none, even an unborn child pushes the mother to the hospital to be given birth to, so it could also meet Macaire and feel his touch.

The future of every Ikono/Ini citizen is secured with Macaire as the Federal House of Representatives member, if he could pay school fees for indigent students in tertiary institutions, foot medical bills for the less privileged, secure employment for the unemployed, dole out cash for the needy, train youths on different trade of their choice and thereafter give start up funds, buy cars and motorcycles for people across the state without any political office attached to his name.

Macaire joined the House of Representatives race in a bid to alleviate his people from the long suffering ” Mkpo Ibaha ke office” syndrome meted on them by previous occupants of the office.

It would amount to perpetual regret for Ikono/Ini citizen if they don’t follow the colossal movement of supporters to vote Obong Emmanuel Ukpong-udo to represent Ikono/Ini in the National Assembly come 2019 as member in the hallowed chamber, to change the political recital of the area from “Mkpo ibaha ke office” to “Mkpo aba ndien” system.

The one mistake Ikono/Ini should not make is not massively supporting and voting Obong Emmanuel Ukpong-udo (Macaire) to manumit the people from ineffective and misrepresentation.