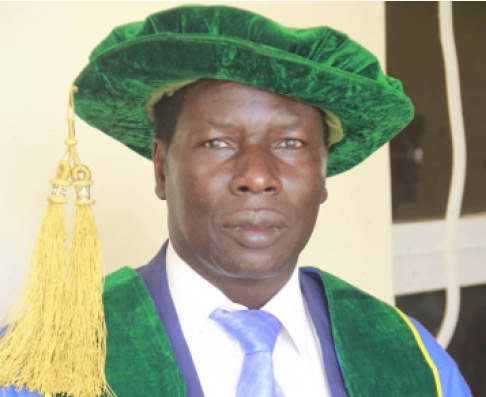 He had to engage in farming, selling firewood and bean cake (Akara), and other difficult activities to raise money to assist his poor parents to sponsor his primary and secondary education.

Born in 1957 at Gar village in Alkaleri Local Government Area of Bauchi State, he has fond memories of growing up as a rusty village boy who loved education: “My parents were lovely and caring. The background was a humble one. Because of this background, I lived a simple life. I enjoyed the rural food because of the intimate, simple rural upbringing.”

He started his education at Gar Local Education Primary from 1964 to 1970 and was at Government College, Maiduguri from 1971 to 1975: “Although my parents were poor, they were supportive but l had to struggle in life to go to school.”

To travel back to boarding school in Maiduguri, Borno State, from Gar, a distance of nearly 600 kilometers, the teenager was usually sandwiched between commodities in big trucks conveying goods from the South part to the North and vice versa. When school resumed, he would begin the journey of days to Maiduguri, with his belongings carefully strapped to his back or tightly held in his arms:

“I would plead with the driver to give me a lift to Maiduguri because I had no money. I had to join them to load their goods and that took several hours before departure.”

The vice-chancellor, who also holds the title of Wakilin Rayar Kasar Tangale, Billiri Chiefdom, Gombe State, is today one of the few from his community to have the privilege of receiving sound education to the highest academic level. But it came at a heavy cost.

That phase of his life was perhaps the most difficult shuttling between Gar and Maiduguri. He was forced to interact with strangers. The dangers were not as pronounced as it is now, but all the same, almost too much for a teenager travelling in the midst of total strangers.

He said the period was marked by long hours of tedious journeys that lasted for hours and sometimes, days: “I just wanted to go to school and l was willing to pay the price.”

There were times the vehicle would break down, or stopover in Darazo, Potiskum or Damaturu or one of those towns along the road to either load or offload commodities: “When that happened, we sometimes spent hours.”

After completing his Senior School Certificate Examination (SSCE) conducted by the West African Examinations Council (WAEC), he decided to remain in Maiduguri rather than going to his village, to eke out a living. Although he dreamt of furthering his education to the university, he was honest with himself because his financial situation made that seemed a mirage.

Not resigning to fate: “I became a cobbler mending shoes, bags, shining shoes to make ends meet.” His corner was under a tree at the Post Office in the Maiduguri metropolis. He became a regular face at the state radio and television outfits at the Post Office area, on a different level:

“I usually swept and cleaned the offices, ran errands for staff and became a well-known unofficial messenger.” It was not long before Haruna’s hard work began to pay off. One day, a woman walked up to the young school leaver and requested for his service.

Haruna said he got to work as usual with no inkling that his life was about to take a dramatic twist. The woman, he stated, struck a conversation with him as he mended her shoes: “She was shocked to realise that I was a secondary school leaver. She was full of empathy when she heard my story.”

He believed the woman was an angel sent by God to ensure his dream to further his education did not perish. Haruna subsequently enrolled at the School of Basic Studies, University of Maiduguri in 1976. He was offered admission to study Linguistics at the University of Maiduguri. In his final year, he received an award for “Certificate for Good Service.”

The journey to become an academic started in 1982 when he was appointed as a Graduate Assistant by the University of Maiduguri. From 1983 to 1990, he received the university’s Fellowship to study at the School of Oriental and African Studies, University of London, United Kingdom.

The village boy who could not afford uniforms, books and other school materials in his primary and secondary school had graduated from university, waved goodbye to a life of poverty and struggles. Haruna rose steadily in his academic career, from a Graduate Assistant in 1982, to an Assistant Lecturer in 1986. Twenty years later in 2006, he became a full professor. The little boy from Gar became the first in his community to become a professor and a vice chancellor.

From 1983 to 1990, Haruna received the University of Maiduguri Study Fellowship to the United Kingdom where he bagged his MA and Ph.D. from the University of London in 1985 and 1990 respectively. He has received numerous national and international awards and written over 40 scholarly articles with varied teaching experience.

In 2016, Haruna was appointed Vice Chancellor, Federal University, Gashua, Yobe State. It came to his notice when friends and associates started calling him on the phone to congratulate him:

“I consider my appointment a challenge and a clarion call to contribute my quota to the development of education in Nigeria, especially in the North East geopolitical region.”

Having had huddles that almost killed his dream, Haruna said he is passionately working to provide an enabling environment to make the dreams and aspirations of many young Nigerians to acquire higher education a reality. He said his goal is to consistently pursue the existing vision and mission statement of the Federal University, Gashua and his passion and drive to create an enabling environment that will provide quality university education to students:

“I want to be remembered for promoting merit and excellence. My desire is to launch the Federal University, Gashua in the stead to becoming one of the best public universities in the country.” Despite the challenge of funding, he is optimistic that the university can be repositioned to become the best with determination and prudent management of resources.

He said he feels at home in Gashua: “The town reminds me of my growing up in Gar village and my struggle. I am not at all bothered by earthly things. Everyday I try to lead a simple life and constantly reminding myself of how blessed I am. I think a lot on how I can become a blessing, particularly to students whose dream is hanging in the balance.

“I shall remain ever grateful to Nigerians whose taxes were used to give me education and the Nigerian government for giving me the opportunity to go to school. As far as I am concerned, Nigeria has given me everything in life. It is my own turn now to pay back in serving humanity anywhere I find myself as long as I am alive.”

Prior to his appointment, he had served in many national assignments both within his state Bauchi and at the federal level.