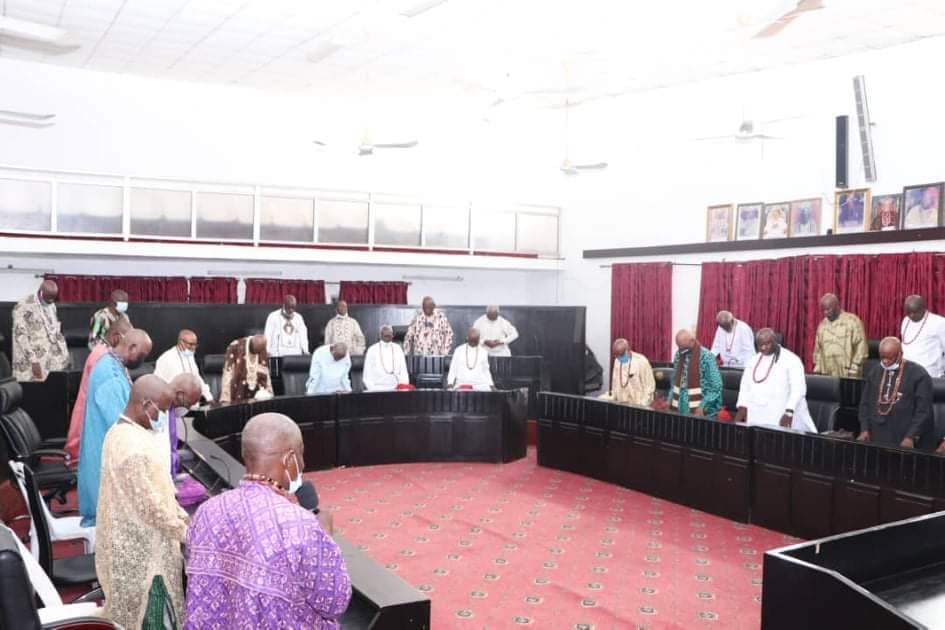 As Agric Commissioner Announced Saturday, 18th September as Akwa Ibom Coconut Day. Governor Udom Emmanuel’s Commissioner for Local Government and Chieftaincy Affairs, Mr. Frank Archibong, has urged traditional rulers in the State to collaborate and share in the vision of the State Governor to ensuring Akwa Ibom becomes the highest grower of coconut.

Mr. Archibong described the decision of the Governor to revolutionize the agric sector through a plantation of coconut seedlings in all public Primary and Secondary Schools across the 31 Local Government Areas in the State as a “Very significant idea that will create more windows for employment and as well enhanced development process”.The Commissioner made the call on Thursday, 16 September when he played host to the Dean of Commissioners who doubles as Commissioner for Agriculture, Dr. Glory Edet, and some traditional rulers across the state in his office.

He said the government of Mr. Udom Gabriel Emmanuel, has invested so much money to ensuring coconut plantation across the State is actualized. “Within a few years from now, and with the genuine support of the traditional rulers, Akwa Ibom State will become the highest grower of Coconut”. Frank Stated. He charged the royal fathers to take the sensitization of ongoing e-registration of Permanent Voters Card (PVC) exercise and National Identity registration as necessary and important means of identification that citizens must be encouraged to participate.

On her part, the Commissioner, Ministry of Agriculture, Dr. Glory Edet, lauded the giant strides in the sector achieved by the Governor, saying that on full completion of the coconut refinery, it will process a minimum of 90,000 coconuts a day. Dr. Edet informed that the State will be marking her Coconut Day on Saturday,18th September 2021 with all the Paramount rulers, Clan Heads and Village heads taking the symbolic roles, announcing that the Coconut refinery is about 90% Completion.

In her words,” We are blessed with a Governor that is dedicated to creating prosperity for the people in Mr. Udom Emmanuel, and God has equally blessed us with massive land size which will make the development process significant for creating wealth for our family and even generation unborn.”

“Coconut oil as we all know is even more expensive than the brent crude in the international market and if there must be a revolution in the sector, it must begin with us and our fathers ( the traditional rulers) must be involved”, she said. In his submission, Clan Head of Esit Eket L.G.A., Etteidung Etteudo Ikot, admitted that he is a beneficiary of Udom Emmanuel’s agriculture programs.

Ette-idung Ikot expressed delight that the opportunity will add more value to the living standard of farmers. Village Head of Aka Offot, Chief Francis Morgan Udo, joined other royal fathers in assuring that the traditional rulers will cooperate with the State Government to bring the dreams to reality.

© Press Unit, Office of the Honourable Commissioner for Local Government and Chieftaincy