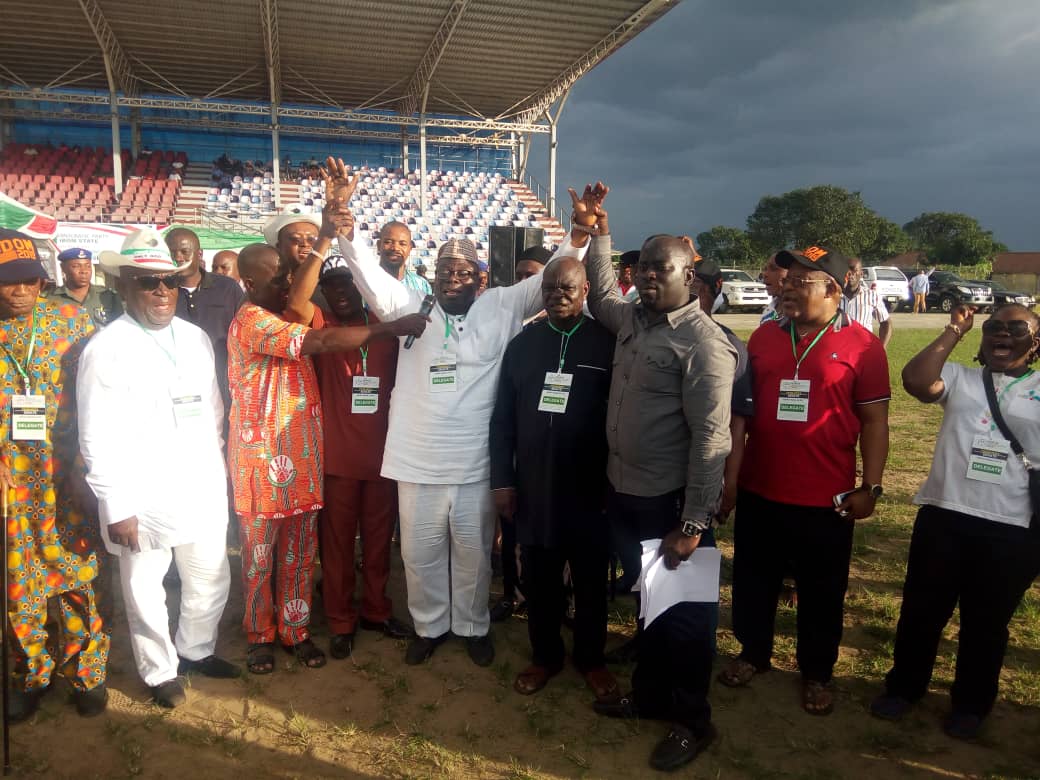 The Commissioner for Investment, Commerce and Industry, Otuekong Prince Ukpong Akpabio has hailed the peaceful and orderly conduct of the congress of the Peoples Democratic Party, PDP, in Ikot Ekpene Senatorial district, held Tuesday at Ikot Ekpene Township Stadium to nominate a candidate that would fly the party’s flag for the National Assembly seat of the senatorial district in 2019.

Fielding questions from news men shortly after the smooth conduct of the party’s primary, which saw the emergence of a former Deputy Governor in the state, Engr. Dr. Chris Ekpenyong as the standard bearer of the senatorial district’s ticket for the PDP, Akpabio commended delegates for the mature way and manner they conducted themselves while the exercise lasted.

While congratulating Ekpenyong on his successful emergence as the party’s candidate, the Honourable Commissioner noted that the Obot Akara born politician usually nicknamed ‘Ukarakpa’ by his political admirers across the state, has always been a loyal and committed member of the PDP, even after he served the state in 1999 as Deputy Governor.

When asked further to assess his capacity to deliver if he eventually gets the peoples mandate through the ballot, the Commissioner responded “His Excellency, Godswill Akpabio has done his first term in the Senate. His Excellency, Dr. Chris Ekpenyong is asking the the party delegates of the PDP and by extension the Senatorial district for their votes to represent Ikot Ekpene Senatorial district. He is an astute administrator, having served as Deputy Governor. So i have no doubt that when given the opportunity, he would also perform well”.

Announcing the result of the primary election, the Returning Officer, Mr. Ebong Okon, said Ekpenyong scored a total of 1240 votes to grab the PDP ticket for the district. 1250 accredited delegates participated in the exercise, while 10 votes were voided.

Reacting, the Senatorial Candidate, Dr.Chris Ekpenyong thanked delegates for the confidence reposed in him, and promised he would not disappoint them in the Senate.

Deputy Governor, Mr.Moses Ekpo congratulated Ekpenyong on his Senatorial ticket, and delegates from the district for believing in him.
delegates drawn the 10 local government areas in the Senatorial district converged on the Ikot Ekpene stadium for the Congress which was watched by officials from the Independent National Electorall Commission, INEC.

Meanwhile, the Honourable Commissioner for Investment, Commerce and Industry, Hon.Prince Akpabio today (Tuesday) officially reported for duty at his assigned Ministry. He was received upon arrival by the Permanent Secretary, Mr. Oliver Udokpo, Directors and other management staff in the ministry.