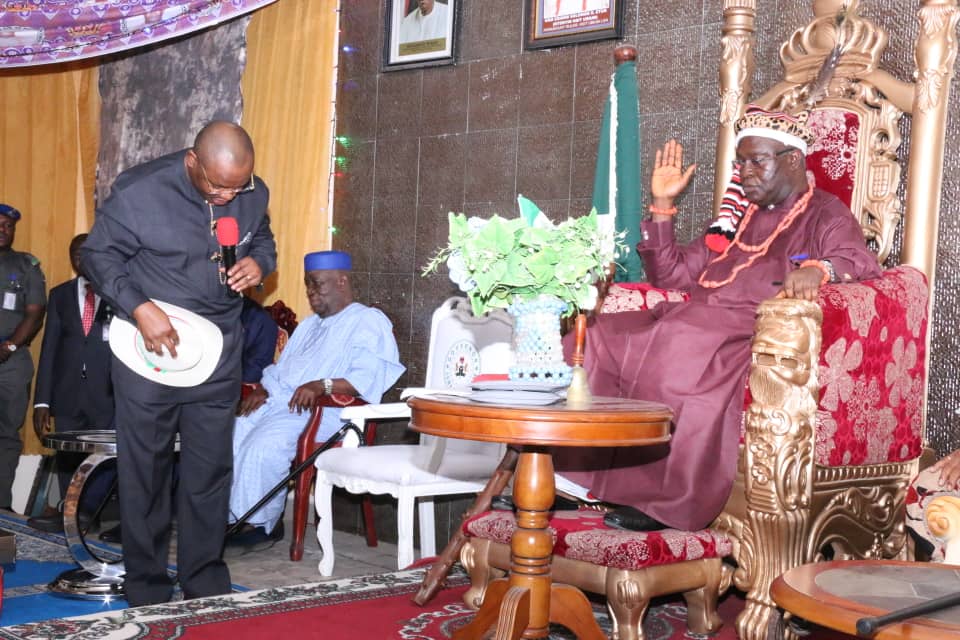 Akwa Ibom state Governor Mr. Udom Emmanuel has reassured that nobody will despise the seat of the Oku Ibom Ibibio being the highest traditional stool of the Ibibios.

He said Ibibio people will not tolerate any further disregard to the seat of the supreme monarch of all the Ibibio people all over the world.

He made this known when he paid homage to Oku Ibom Ibibio, Edidem Solomon D. Etuk, at his palace in Ikot Ukobo Nsit Ubium LGA.

The Governor said the visit would have come immediately after the coronation, but owing to pressing official matters, it was not possible then.

He was hopeful that the advent of the new king, will further unite the ibibios towards a common goal of development driven aspirations.

“At this time we need collaboration and strong cooperation for us to move Akwa Ibom forward,” he said.

In his response the Oku Ibom Ibibio Edidem Solomon D. Etuk appreciated the Governor and his executive council, urging the Governor to sustain the peace and prosperity currently experienced in all parts of the state.

“Your Excellency, we want to thank you for the peace and prosperity you have brought to Akwa Ibom State. We want this peace to continue and that is why we; the entire Ibibio land has endorsed you.”

Also speaking, the Speaker of Akwa Ibom State House of Assembly, Rt. Hon Onofiok Luke and the
Senator Representing Uyo Senatorial District, Obong Bassey Albert recounted the importance of the Asan Ibibio in the re-election of past Governors in the state, saying that the administration of Governor Udom Emmanuel would not be an exemption.
“Attah was endorsed at Asan Ibibio, he won 2nd term.
Akpabio was endorsed at Asan Ibibio, he won second term.
Udom has been endorsed by Asan Ibibio, and he will win his second term bid,” Sen Albert added.

Highpoint of the visit was the presentation of a Range Rover 2018 SUV to the traditional ruler by the Governor on behalf of his family, assuring that there will be presentation of an official car from the state government soon.

It would be recalled that Edidem Etuk replaced slained Edidem Robert Obot who was assassinated 2011 in the wake of the reign of terror era in Akwa Ibom state.