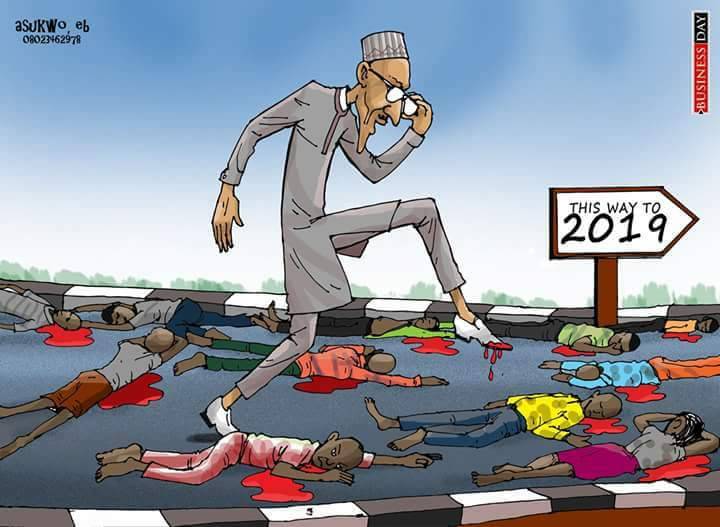 Elders, leaders of socio-political organisations and key stakeholders from the northern part of the country have scored the performance of President Muhammadu Buhari low and consequently, rejected him as the candidate to run for the 2019 general elections.

The leaders who met on Saturday in Kaduna insisted that the present leadership representing the region has failed in its mandate and therefore, must be replaced by competent persons.

Those present included the leaders of the Northern Elders Forum, Arewa Youths Consultative Forum, Borno Elders Forum, Supreme Council for Sharia in Nigeria among other groups.

In a communique read by a member of the Northern Elders Forum and Chief of Staff to Nigeria’s Senate President, Dr Hakeem Baba- Ahmed, the northern leaders lamented that despite being in power since 2015 when they voted President Muhammadu Buhari into office, the economy, security and political fortunes of the region have continued to deteriorate with the leaders doing little or nothing to salvage the situation.

According the communique, the current leadership at the federal level has not demonstrated enough strong will to tackle the Boko Haram insurgency, rural banditry and herdsmen/farmers clashes that have claimed several lives in many parts of the region, while little effort has been made to tackle poverty that has continued to ravage the northern region and the entire country.

“We demand immediate and decisive steps to improve the security of lives and economic assets in the North by the federal and state governments. Too many communities are at the mercy of attacks from sundry groups of criminals who appear to have unchallenged access to space and weapons,” Baba- Ahmed said.

The northern leaders also stressed that the region will not vote for any politician who fails to show a willingness to address the numerous challenges facing the region.

“The Summit noted that despite notable successes by the administration against the Boko Haram insurgency in the North East, many Northern communities still live under its threat. In many other parts of the North, communities are routinely exposed to attacks from shadowy killers, and suspicion and anger at known and suspected killers are pitching Northerners against each other. Armed bandits terrorize rural communities almost at will, while kidnappings and abductions have assumed alarming notoriety as crimes.

“The nation’s security and law and order assets are stretched beyond points where they can’t provide even the most elementary confidence and protection of citizens. The North has rarely been so exposed to multiple and varied threats”.

“Since 2015, Northerners have occupied positions with the potential to make decisive differences in the economy, security or political fortunes of the region. The hopes that leaders who have exercised power since 2015 will reverse the abuse and neglect of the region in the previous decade have been betrayed. Weak governance, gross insensitivity and unacceptable levels of incompetence have been compounded by battles of attrition in which northerners have sapped each other’s’ strength. Weak and incoherent responses to provocations from other parts of the country around the imperatives of re-visiting the foundations and structures of the Nigerian state have created the false image of a North without its own positions beyond survival as the parasite of Nigeria.

“The Summit, having undertaken a thorough analysis of the state of the North and our communities, therefore urges all leaders, elders and communities to seek peaceful resolutions of conflicts between and among communities. Lives lost, injuries suffered, and losses incurred in any community must be redressed firmly and fairly. The roots of co-existence and inter-dependence in all Northern communities are much deeper than the barricades being erected around communities. All persons who are involved in killings and crimes against communities must be brought to book.

“The summit warns that no Northern politician should expect to be voted for in the next general election unless they demonstrate a willingness to champion a massive assault on poverty and underdevelopment in the North. In this regard, most political office holders from the North are hereby served notice that they have failed the test to lead the region towards economic recovery and growth.

“The summit asserts the rights of all Northerners to examine all options in political choices they will make in 2019. The leadership selection process must be critically interrogated to present the best leader to Nigeria as a whole. No one should take the North for granted, and it is not for sale. It will resist shedding its blood for any candidate and will critically scrutinize all politicians who will seek our mandate. At this stage, all options are on the table, and politicians who have betrayed the hopes and mandates of our people should be prepared to suffer rejection, in the same manner, the votes of the North rejected the attempt to continue with impunity, corruption and indifference of the previous regime,” Baba-Ahmed stated.