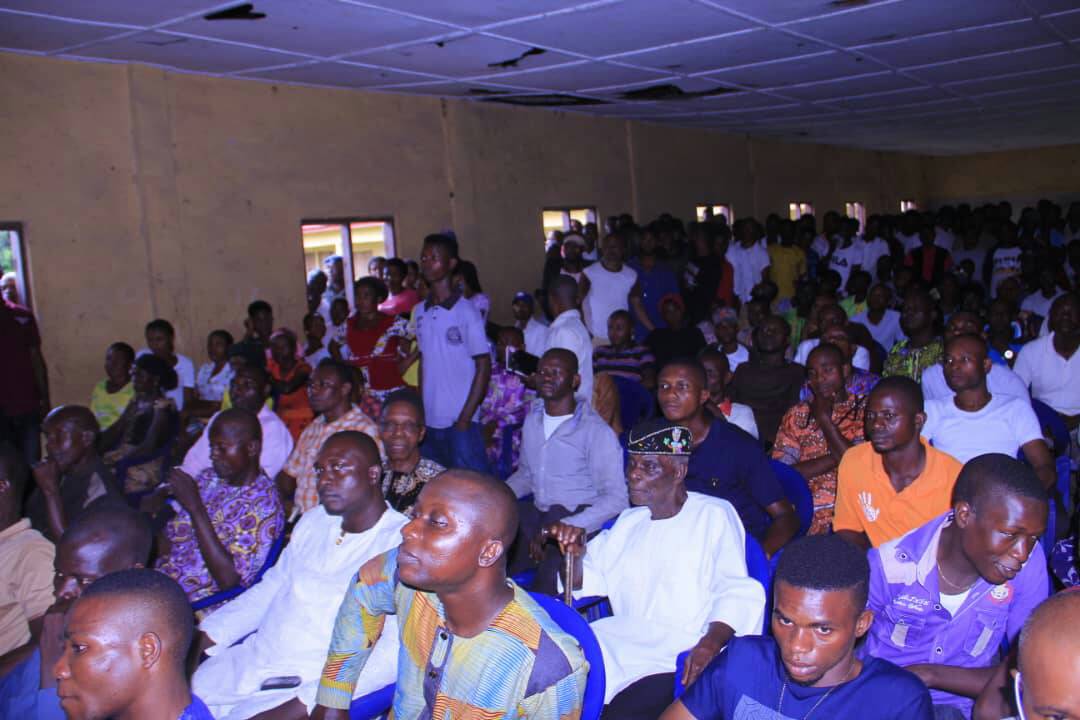 Over 251 Political leaders and stakeholders in Oruk Anam local government area have asked Sir. Udo Kierian Akpan, Leader of the Akwa Ibom State House of Assembly and member representing Oruk Anam to contest again for the representative seat he is currently occupying in the 2019 election.

They declared their support for another term of office for the lawmaker on Wednesday 27th June at a special meeting held in Ikot Esenam, Oruk Anam.

The meeting was attended by chapter officers of the PDP, ward chairmen and their deputies, women and youth leaders, secretaries of wards, councillors, former party officers, and thousands of supporters of the lawmaker from across the 13 wards of the local government.

This endorsement is coming five days after a group of youths purportedly from Oruk Anam asked Mr. Akpan to jettison his third term aspiration, in what observers described as a protest sponsored by a few political office holders from the area who are not comfortable with the fame currently enjoyed by the House Leader.

If Kierian Akpan gets the ticket from the PDP for next year’s election, it will be the third time the lawmaker will be contesting for the seat, as he acceded to the request. .

Those who spoke at the meeting said Sir Akpan had given a good account of himself as their representative and is deserving of another term because he has lived up to his electoral promises.

A former chairman of Oruk Anam local government area, Effiong Thompson Udonwo, a political stalwart, Nicolas Idungafa, and Chief Bassey Essien, who were part of the forum, said the constituency is being represented by a lawmaker whose impact is being felt by everybody.

In particular, Mr Udongwo who described last week’s protest the lawmaker’s aspiration as a misplaced priority, said it was carried out by youths who were chasing shadows rather than the main issue.

“The main issue is that we have agreed for both Governor Udom Emmanuel and the Senate Minority Leader, Senator Godswill Akpabio, to go back for their second term, and it makes great political sense to back our performing lawmaker, Sir Udo Kierian Akpan, for another term.

He also pointed out that the House Leader, apart from initiating quality debates on the floor of the House of Assembly, has made so many interventions in his constituency, and has lived up to his electoral promises thereby making the whole people proud.

Meanwhile, the youths of Oruk Anam have distanced themselves from the recent protest against the third term aspiration of the lawmaker.

Kingsley Frank Ikwot, together with the Vice Chairman of Oruk Anam Caucus and the Chapter Youth Leader of the PDP in the area spoke on behalf of the youths at Wednesday meeting.

“We were not aware and were never part of whatever protest that had been done in Uyo. The youths were never consulted and we don’t know whatever that happened there.

“As the epicenter of Oruk Anam youths, our position is that Governor Udom Emmanuel should go back for a second term in office, including His Excellency the Senate Minority Leader, while a fresh term is what we want for our leader, Sir Udo Kierian Akpan”, Ikwot said.

In the local government, the three political offices of council chairman, PDP chapter chairman and the house of assembly seat are usually shared by representatives from the two zones.

The current chairman of Oruk Anam local government council , Mr Ubong Idiong, who is the elder brother to Mrs. Martha Udom Emmanuel, the governor’s wife, is from the Oruk zone. The other office, which is that of the chairman of the ruling PDP, is occupied by Mr. Jacob King, also from Oruk. Going by the zoning arrangement of the area, those at yesterday’s meeting said that the political configuration favours the Anam zone to retain the only remaining political office in the area which is the office of member of legislature currently occupied by Udo Kierian Akpan.

Earlier in his address to the people, Kierian Akpan said members of the PDP and the entire Oruk Anam people are peaceful brothers and sisters, noting that anyone who plans to cause trouble during next year’s general elections will not succeed.

“When the political situation became hot during the 2015 electioneering, we were the ones who stood firm and supported our party. In the forthcoming 2019 elections, we will still support the party.

“Oruk Anam is not volatile area. For those who have caused to be published that there’ll be crisis in Oruk Anam as it is happening in Ukanafun, I am calling the security agencies, police and the SSS (State Security Services) interrogate them on what they know about the Ukanafun crisis.

“Seeking for re-election is not a crime. When I go for the primary election of the PDP in Oruk Anam and voters cast their votes against me, I will leave in peace and embrace the winner and work for the party. If I win, we will all work for the party. I am calling on the men, women and youths of Oruk Anam to remain in peace as we look forward to the elections”.