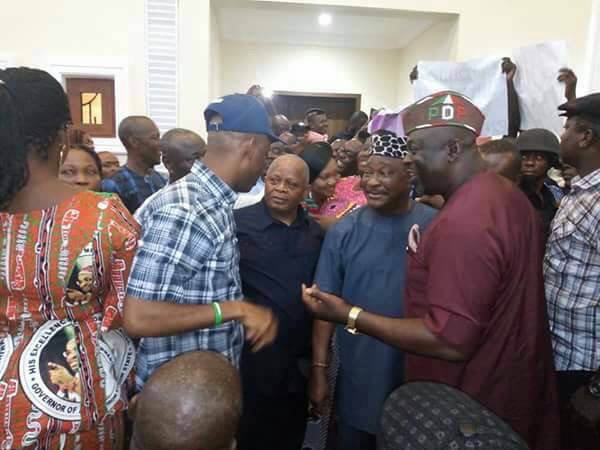 Speaker of Akwa Ibom State House of Assembly, Rt. Hon. Barr Onofiok Luke has officially intimated the state Chairman of the party, Obong Paul Ekpo of his intention to vie for the National Assembly seat for Etinan Federal Constituency in the forthcoming election in 2019.

He made his intention known, Friday when he paid a consultation visit to the party Chairman at his country home in Nkana, Etinan Local Government Area. Accompanied by members of his campaign team, Stakeholders, supporters and some statutory party delegates from the federal constituency, Barr Luke said his decision to join the race was in response to the clarion call by the people of the Federal constituency who pleaded with him to represent as their next representative in the House of Representatives, Abuja come 2019.

Luke, a two term lawmaker who is currently representing Nsit-Ubium state constituency in the state Assembly told the party Chairman that aside from being favoured by existing zoning arrangement which favours Nsit-Ubium to produce the next National Assembly member for the Federal constituency in 2019, he has got the capacity and legislative experience required to give the area an effective representation in the Green chamber if voted into office.

“My aspiration is coupled with the yearning and aspiration of the people of Etinan Federal Constituency who want me to go and represent them in 2019. By 2019 you are going to hear a loud voice articulating the interest of Etinan Federal Constituency and the interest of Akwa Ibom. In the National Assembly”.
He promised to use his position in the National Assembly to better the wellbeing of the people of the Federal constituency.

Presenting the Speaker to the party Chairman, his campaign Manager and  Director General of Amazing Grace Campaign Organisation, Rt. Hon Anietie Etuk who is a former Speaker in the state House of Assembly described Barr Luke’s aspiration as the best thing to happen to the federal Constituency. Etuk, a former  Chapter Chairman of the PDP in Nsit Ibom, ex-Council Chairman and former member of the state executive council said the Federal constituency needed a vibrant person that would stand the storm during the election in the federal constituency, noting that Onofiok Luke possesses the requisite political credentials and sagacity to lead the party to victory in Etinan Federal Constituency in 2019 and also give the Federal a voice in the National Assembly.

“He is our son. Today, we believe that he should not end in the state, he should move forward to Abuja after completing his tenure in the House of Assembly. We need a vibrant man that will stand the storm during the election.
“We came to consult you and seek your consent for the Etinan Federal Constituency by informing you that we will be nominating the best candidate for the election”.

Others who spoke glowingly about the aspiration of the Speaker at the consultation meeting include, the Chairman, Assembly Service Commission, Christ Ambassador Andrew Unwanta who also double as Chairman, Advisory Council of the Campaign committee, Council Chairman of Nsit Ibom, Hon Eric who spoke on behalf of the Chairmen of the three local government areas in the federal constituency, former Chairman of Nsit-Ubium, Obonguwana, Essien Esema, Capt. Iniobong Ekong, Leader of Etinan Legislature, Hon. Udofia who spoke on behalf of the other two Leaders of the legislature and all the Councilors in the federal constituency. Others include, Mr. Joe Emah who represented the youths, and Hon. Sarah Esit Ikot who spoke on behalf of the women in the federal constituency. They were unanimous in their endorsement of Barr Onofiok Luke for the House Representatives seat for Etinan Federal Constituency.

Responding, the State PDP Chairman, Obong Paul Ekpo commended the Speaker Luke for the respect he has shown to the party and the office of the Chairman of the party by being the first person to officially consult him of his aspiration. He informed that the party was repositioning itself ahead of next year’s general election with a view of coming out victorious in the election.
Ekpo who is the Chairman of all State Chairmen of the party across the federation said the party will ensure that power devolves back to the people, explaining that in 2019, any politician seeking elective office in 2019 must be able to show strength in his unit, as it is the people who would choose their leaders.

Addressing the gathering, Ekpo said the party will only file candidates who would be able to win votes for the PDP, and advised party delegates to choose the right persons to fly the flag of the party for all offices in 2019.